Laxenburg, Austria – 14 February: An interactive web tool has been developed to improve the accuracy and extent of global land use and forest cover information. The new ‘Geo-Wiki’ uses Google Earth and information provided by a global network of volunteers to fill in ‘data gaps’ and to verify existing land cover information. Developers this week have launched a Geo-Wiki competition to raise awareness of the tool and to encourage community involvement in environmental monitoring. 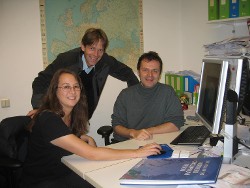 Access to accurate land cover data is increasingly important as nations strive to balance issues such as agricultural production for food security with, for example, their objectives regarding climate change or biodiversity conservation. While much land cover information exists it is often conflicting, partially due to the scale at which it is collected, the uneven coverage of the data, or the different definitions of the land cover classes used.

“Global land cover information available to policymakers and the research community today is derived from remote sensing,” says Dr Steffen Fritz, leader of the Geo-Wiki development team and research leader from the International Institute for Applied Systems Analysis (IIASA). “While there are several excellent regional and national land cover datasets already available that capture some basic information, there are still many regions where the information derived from satellite sources is conflicting, or inconsistent, across the datasets.”

“This means we cannot be certain of the spatial distribution of deforestation, how much land is being used for cropping or, for example, the extent of urbanization. This has implications for how regions assess such things as their carbon storage potential, how much land could be available for food production or biofuel expansion, decisions that are becoming increasingly important as climate change and food security concerns escalate,” says Dr Fritz.

The new competition aims to encourage volunteers to log on to the site, identify where they are in the world, view the information already available via the Google map and, to the best of their ability, provide their interpretation of the land cover in the area. To participate in the competition visit: http://competition.geo-wiki.org/login.php.

Geo-Wiki brings information from multiple sources together into one platform making it easier to compare information and enabling, for the first time, validation of the land cover and other significant information by volunteers. The project aims at producing a hybrid land cover map which is more accurate than any current individual product can provide. The rationale and technical underpinning for the Geo-Wiki are outlined in the January issue (online version) of the international journal Environmental Monitoring and Software (see below).

Geo-Wiki uses Google Earth as the delivery platform and crowd-sourcing as the mechanism for collecting and verifying land cover data. Crowd-sourcing leverages the immense power of web technologies to capture data from a large and undefined group of people. Social media channels such as Twitter and Facebook also offer enormous opportunities for capturing information across vast regions.

In the case of Geo-Wiki, when a volunteer registers, information is collected on where they live, their profession, and their local knowledge. They are asked to review locations – or ‘hotspots’ - where data is missing or where there is disagreement over the land cover. The data inserted by a volunteer is ‘quality assessed’ via control points. This involves the use of an internal scoring mechanism which compares known validations with those provided by the volunteers and hence allows the Geo-Wiki team to identify those users that are able to provide high quality validations. Data is also systematically compared with input from other users as another way of assessing data quality. Volunteers are encouraged to submit photographs of the location to help in the validation of the land cover. The majority of registered volunteers to date have some professional association with remote sensing.

Once submitted the land cover information recorded in Geo-wiki is freely available for decision makers, land managers, or any member of the community anywhere in the world.

Several additional Geo-Wikis have also been developed. An agriculture Geo-Wiki aims to provide the most detailed coverage to date of the type and extent of agriculture, while urban Geo-Wiki (urban.geo-wiki.org) helps users to better understand the percentage of the earth’s surface under urbanization. Current estimates of the total land surface classified as urban vary from between 0.05% to 3% of the Earth’s surface, a significant disagreement that the Geo-Wiki team hope to reduce. Other Geo-Wiki ‘branches’ currently developed include biomass cover, human impact, archeology, and regional Geo-Wiki.

“Geo-Wiki attempts to bring information together on many aspects of the Earth’s surface, this information is primarily associated with how humans have managed or modified landscapes and ecosystems. To address the many challenges global communities are dealing with, such as climate change or food security, we need multidisciplinary responses. Policymakers thus need information that is not only as accurate as possible but that is holistic – we cannot deal with climate change, independent of how we deal with food security or energy security. Geo-Wiki is one tool to start bridging this information gap, integrating information, and, ultimately, we believe supporting the development of more integrated policy and management decisions,” said Dr Fritz.

Geo-Wiki is a relatively new tool, with approximately 700 registered users world-wide. However, in a short time these volunteers have validated over 55, 000 areas (or validation points) equivalent to an area of about 12-15,000km2.

Geo-Wiki draws on the global network of satellites and technologies that form GEOSS, the Global Earth Observation System of Systems. GEOSS links existing and planned observing systems around the world to support the development of new systems. The aim is ultimately to improve the benefit society gains from earth observations by improving forecasting in areas such as deforestation, environmental disasters, disease outbreak, climate change or mapping ecosystem change.

To maximize the value of Geo-Wiki the developers are encouraging people to get involved. In a similar way to the immensely popular bird watching ‘eBird project’ (ebird.org) - which has some 48 million records of bird sightings globally - the value of Geo-Wiki will be realized through the involvement of the global community.