Putting a price on climate change

The social cost of carbon dioxide is one of the most influential indicators of climate change as it allows us to estimate the cost of greenhouse gas emissions to humanity. A new study looks back on how ten years of scientific advancements have influenced such estimates, and explores how to resolve some of the most important outstanding gaps in existing models. 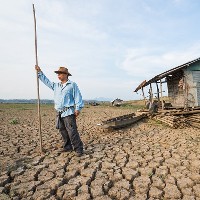 As climate change affects us and our environment in a myriad of ways, the urgency of climate action is very clear. However, capturing this in a quantitative indicator is not easy, or perhaps not even possible. Many indicators, such as the intensity of weather extremes or the extent of global temperature and sea level rise, only consider part of the problem. The social cost of carbon dioxide (SCCO2) is an indicator that aims to give a comprehensive picture of the severity of the climate crisis by calculating the economic cost of greenhouse gas emissions to society.

The SCCO2 has emerged as one of the most important climate indicators in the last decades and it is often used as a basis for climate policy actions. Expressed in US dollars per tonne of emitted carbon dioxide, the estimates for SCCO2 vary greatly between US$10 and $1,000, with recent comprehensive estimates being in the range of $300. Policy recommendations tend to focus on the lower end of the spectrum, likely underestimating the damage caused by climate change.

Models used to estimate SCCO2 combine the costs and benefits of global warming and climate action under different scenarios. While there are numerous existing SCCO2 models, they often do not include comprehensive representations of climate feedbacks, economy feedbacks, or climate extremes, even though these factors are likely to be highly influential. In a new study published recently in Environmental Research Letters, IIASA researchers looked back at a decade of developments in the PAGE-ICE model and extended it to advance our understanding of SCCO2 estimates. For instance, the study estimated how different climate feedbacks already included in the model, such as the melting of permafrost and the reflectivity of surfaces impact the SCCO2.

The researchers for the first time included annual climate variability in the new version of the PAGE-ICE model, in an attempt to better capture climate extremes and events like El Niño.

“Generally, SCCO2 models work with climatic temperature trends. In the real world however, temperature varies a lot. This variation is important to capture, as it influences our cost estimates,” says Jarmo Kikstra, study lead author and researcher in the IIASA Energy, Climate, and Environment Program.

In addition, they explored the effects of rising temperatures on the growth of the economy and its feedback on greenhouse gas emissions and future temperatures and also introduced partial climate impacts in the model  ̶  in other words, the possibility that some of the economic damages might persist forever rather than being recovered right away.

Illustrative sketch of changes and extensions to the PAGE-ICE model.

The newer PAGE-ICE model almost doubles SCCO2 estimates compared to the previous version (PAGE09), especially due to a better understanding of impacts in the Global South (before taking into account variability and persistent damages).

“Burning CO2 has a cost to society, even if it is not directly to our wallets. Each person’s emissions could very well result in a cost to humanity of over $1,300 per year, potentially rising to over $15,000 once the impacts on economic growth are included,” says Chris Brierley, coauthor and researcher in the Department of Geography at University College London. (Global average per capita emissions were 4.7 tonnes of CO2 in 2017 according to Our World in Data, with the US value being three times higher.)

While climate variability and feedback have played a part in increasing the SCCO2 estimate, considering the potential of climate impacts having persistent effects on economic growth could have a much larger effect, possibly increasing the economic cost of CO2 emissions by an order of magnitude.

“A main contribution of this study is that it expressly considers the uncertainty around if and to what extent damage from climate impacts could partially persist and how implications range across levels of persistence and adaptation. Previous studies have explored persistence, but our estimate accounts for the considerable uncertainties based on empirical data,” says study coauthor Paul Waidelich from the Climate Finance and Policy Group at ETH Zürich.

”The real cost of burning CO2 may have been underestimated by much more than we expected. This may be because of a failure to appreciate the huge damage climate change can cause in the Global South,” adds Brierley. 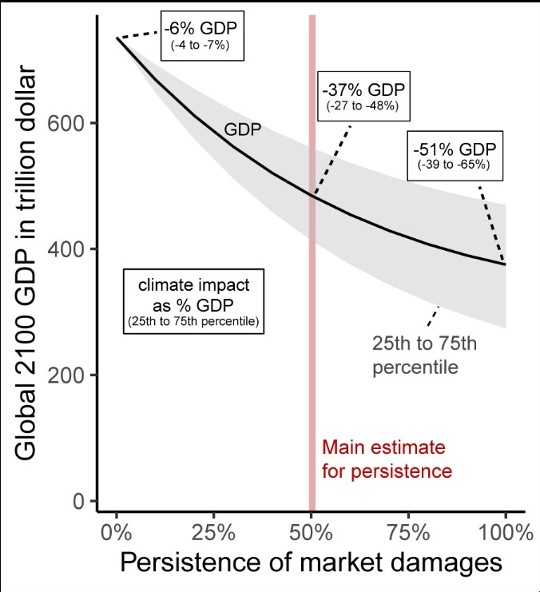 Mean global GDP in 2100 (y-axis), depending on the extent to which climate change economic damages persist (x-axis). GDP change numbers show the decrease in global GDP relative to a scenario with no climate change. The annotations show the total climate impact in the year 2100 and their uncertainty range.

The results of the study highlight the urgent need to take climate action.

“Previous SCCO2 estimates already exceeded the price of carbon in effect across the globe. Our results highlight the urgent need for policy decisions that reduce CO2 emissions quickly, and introducing higher carbon taxes is one way to do that,” concludes Kikstra. 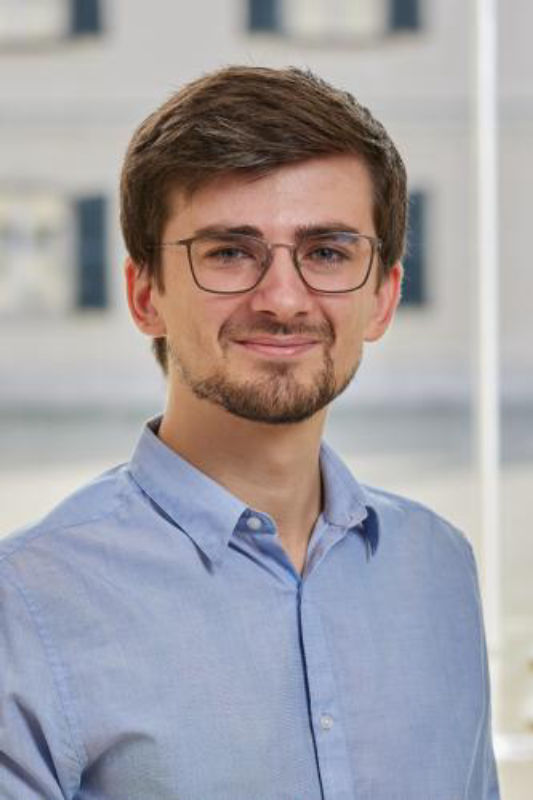