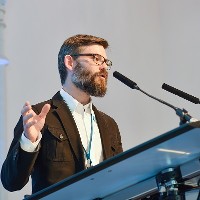 Ten different awards were conferred to individual scientists and organizations in recognition of their leading-edge research in different fields of science in the first-ever edition of the ISC Awards, which recognize excellence in the advancement of science as a global public good. All ten of the inaugural awardees are working on issues of critical importance to science and to society, including tackling pandemics in low-resource settings, reducing emissions, developing pathways to sustainable development, making scientific knowledge accessible to all, and safeguarding scientists at risk. The awards will be conferred every three years during the ISC General Assembly going forward.

Six awards specifically recognize the achievement of early-career scientists across different regions of the world including Latin America and The Caribbean, Africa, North America, Asia, Australia and Oceania, and Europe. Joeri Rogelj, a senior researcher in the IIASA Integrated Assessment and Climate Change and the Transformative Institutional and Social Solutions research groups of the Energy, Climate, and Environment Program and Director of Research and Reader in Climate Science and Policy at the Grantham Institute for Climate Change and the Environment, Imperial College London, received the Early Career Scientist Award for Europe.

Rogelj’s research has had an exceptional impact on international climate policy. His pioneering work on climate change scenarios changed the global conversation around the feasibility of keeping global warming to 1.5°C in advance of the UN Paris Agreement. His other major contributions have increased understanding of climate action and include studies on the effectiveness of international climate agreements, of carbon budgets and net-zero targets for limiting climate change, and of the interaction between climate action and sustainable development. Over the past decade, he has played a leading role in international climate science and policy, serving as an author on highly influential reports of the Intergovernmental Panel on Climate Change (IPCC) and the UN Environment Programme (UNEP), providing expert evidence to the UN Framework Convention on Climate Change (UNFCCC), and serving as the youngest member on the UN Secretary-General’s Climate Summit Science Advisory Group in 2019.

Rogelj’s commitment to making his research findings available to decision makers also extends to making it accessible to non-scientific audiences. In this regard, he has made himself available to discuss matters around climate change with media including the Independent, The Guardian, and Forbes, and he has participated in YouTube videos to answer popular questions about climate change. Through this engagement, Rogelj has demonstrated a strong ability and a desire to not only inform the public about the outcomes of his research, but also to explain the importance of the work in the context of global events, including the upcoming UN Climate Conference (COP26) in Glasgow.

Rogelj is a rising star of climate science and will continue to inform policies and the public about the crucial issues of global warming and pathways to sustainability. IIASA proudly congratulates him on this outstanding achievement.

See the original announcement on the ISC website: here.