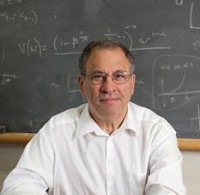 Levin was awarded the honor for his research linking ecology and socioeconomics.

Levin, a professor of Biology at Princeton University, was Chair of IIASA’s governing Council from 2003 until 2009, Vice-Chair from 2009-2013, and Chair of the US Committee for IIASA throughout this time. He continues to  collaborate with IIASA researchers, particularly Ulf Dieckmann, in the field of modeling ecological and evolutionary dynamics.

The “Luca Pacioli” award was established by Ca’ Foscari University of Venice in order to formally recognise distinguished figures in the sciences, economics, arts and literature, who stand out in a particular field of study taught at Ca’ Foscari, and who have integrated solid interdisciplinary value within their research.

The reference to Luca Pacioli – a Renaissance humanist (philosopher, mathematician, expert on economic and financial matters) who was of great importance in the history and culture of the Veneto, and in Venice in particular - highlights the broad range of expertise and interdisciplinary relationships that the award aims to acknowledge.

The award is envisaged as a recognition of the efforts of scholars, artists, economists and scientists whose work has received prominent international acclaim and recognition (awards, visibility, funding, publications, notable appointments, honorary positions). It acknowledges in particular the international and interdisciplinary character of their research, that is, work carried out within various cultural contexts, as well as the contribution made not only within their field of study, but that has potentially expanded into one or more other disciplines.

On 10 November, Simon Levin will give a lecture entitled "Obstacles and Opportunities in Environmental Management"