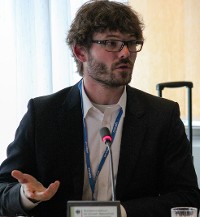 The ETH Medal is ETH’s highest distinction for a PhD thesis, with only the top 8% being eligible for this honor each year. Professorial chairs are limited to recommending one candidate every two years, and research in the running for the medal also has to pass rigorous external reviews. As well as being judged on scholarship and scientific excellence, Dr. Rogelj’s work was assessed for scientific innovation, interdisciplinary approach, and practical relevance, among other important factors.

Dr. Rogelj first joined IIASA in 2011 as a participant in the Young Scientists Summer Program during which he conducted work in support of his thesis on how near-term decisions influence the achievability of limiting global warming to 1.5 or 2°C in the long term.

For five years, he has been a lead author on the annual policy synthesis reports by the United Nations Environment Programme that assess progress of the international climate negotiations towards limiting warming to below 2°C (The UNEP Emissions Gap Reports). He is also a contributing author to Working Group I (Physical Science), Working Group III (Mitigation), and is member of the extended core writing team of the Synthesis Report of the Fifth Assessment Report of the Intergovernmental Panel on Climate Change (IPCC).

Dr. Rogelj holds a Masters degree in Engineering and a complementary Master in Cultures and Development Studies. He has worked earlier at the Potsdam Institute of Climate Impact Research (PIK) in Germany, and also as a project engineer on rural electrification and drinking water systems in Rwanda, as well as in Colombia and Denmark.