The Thomas C. Schelling Award, bestowed annually to an individual whose remarkable intellectual work has had a transformative impact on public policy, named after the recipient of the 2005 Nobel Prize for Economics, IIASA Endowment Fund donor and alumnus, Prof. Thomas Schelling is returning to the IIASA family this year! 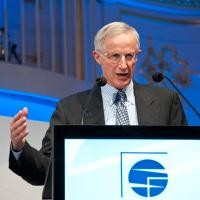 On May 6, the Thomas C. Schelling Award will be presented to Prof. William Nordhaus, the Sterling Professor of Economics at Yale University, chair of the Boston Federal Reserve Bank, and a close collaborator of IIASA.

One of the past recipients of the Schelling award (2008) was Prof. Howard Raiffa, the first IIASA director and an influential Bayesian decision theorist and a pioneer in the field of decision science.

Watch Nordhaus’ 2012 Lecture at the IIASA Conference and read about his new model for climate treaties on IIASA research blog.