Andrew Johnson new Director of the Bureau of Meteorology in Australia

IIASA congratulates our former IIASA Council Member on his recent appointment with the Australian Bureau of Meteorology. 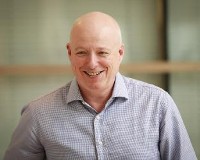 The Australian Minister for Environment and Energy, the Hon. Josh Frydenberg MP, announced Dr. Andrew Johnson as the new Director of Meteorology on 6 September 2016.

While Dr. Johnson served as CSIRO Environment Group Executive, he was instrumental in CSIRO becoming a National Member Organization (NMO) of IIASA.  During his visit to IIASA in 2013, he said, "How does humanity feed, fuel, power and provide water for 9 billion people over the next hundred years without destroying the environment? In order to answer these questions we need to grow our relationships with organizations like IIASA."  Dr. Johnson served as IIASA Council Member from 2013-2015.

Dr. Johnson was a member of the CSIRO Executive Team for nearly a decade, where he led the organization's water, land, atmospheric, marine, biodiversity and urban research.  The press release from the Hon. Josh Frydenberg MP states, "his trusted relationships with industry, governments and the wider community in these areas, his vision and his leadership will help the Bureau continue to maintain, develop and extend its vital services across Australia."

Dr. Andrew Johnson is an internationally recognised leader, manager and scientist. Since September 2015 he has been the Principal of Johnson & Associates Consulting, a firm providing environmental and agricultural knowledge services to a diverse range of clients in the private and public sectors both nationally and internationally.

For nearly a decade Dr. Johnson was a member of the CSIRO Executive Team where he led the organisation’s water, land, atmospheric, marine, biodiversity and urban research. Whilst at CSIRO he also led their Indigenous engagement agenda. For two years he was CSIRO Executive Director of Strategic Change Programs with responsibility for implementing shared services for CSIRO’s IT, Finance and HR functions as well as implementing the SAP enterprise resource planning system.

Since 2012, Dr. Johnson has been a member of the Australian Government’s Independent Expert Scientific Committee on Coal Seam Gas and Large Coal Mining Development (IESC). He was appointed Chair of the IESC in 2015. He is a Non-Executive Director of the Planet Ark Environmental Foundation, a Councillor of the Queensland Futures Institute and a member of the Scientific Advisory Board of the Australian Agricultural Company. He is a former Non-Executive Director of the Rural Industries Research and Development Corporation, Reef and Rainforest Research Pty Ltd and CSIRO Chile, where he was Deputy Chairman and Vice President.