The new Jacques Perrin/Galatee film, The Seasons, opened in French theaters this past January and is now showing in Austria and Germany. 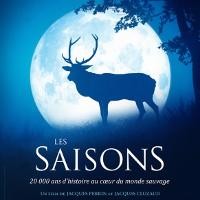 The following 2-minute trailer for The Seasons shares a French narration explaining that the film spans the end of the Ice Age to the present day, showing how the birth of the seasons, and then the emergence of humans, led to the natural world as we know it.  Filmed over a four-year period in the national parks and animal reserves of Poland, Romania, Norway, Holland, Scotland, and France at a budget approaching $40 million, the film makes use of cutting-edge technology like flying drones and high-speed scooters to allow viewers to share the experience of bison, reindeer, wolves, owls, and other animals.

We highly recommend the documentary to those in Austria and Germany.

Jesse Ausubel is currently the Director of the Program for the Human Environment and Senior Research Associate at The Rockefeller University in New York City. He participated in the 1979 YSSP and then was leader of IIASA's Climate Task within the Resources and Environment Program from 1979-1981.  Of IIASA, he says: “My experiences at IIASA profoundly influenced my career in every way: the problems I work on, the ways I approach the problems in a technical sense, the shift from a uni-national to a multi-national perspective, the networks of people with whom I work, and my belief un the contribution science can make to conflict resolution.”

Jesse at The Rockefeller University