Former YSSPer Ike Umejesi recently visited IIASA to meet with his YSSP supervisor Mike Thompson. Below he writes about their current collaborations and life after the YSSP. 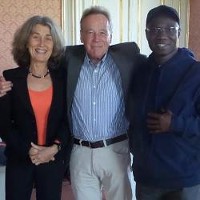 Ike spent two weeks with his doctoral student, Moshood Issah, at IIASA in November 2017. They worked with Mike Thompson on the student’s project titled: Contending discourses around uranium mining in the Great Karoo: implications to governance. This is Ike’s second visit to IIASA since the 2009 YSSP, having visited in 2013.

Life after the YSSP: My Continuing Collaborations at IIASA
by Ike Umejesi

I have been collaborating with Mike Thompson since 2009, when I was a YSSPer in what was then the Risk and Vulnerability Program (RAV). Mike was my supervisor back then, and we have since collaborated on a number of research endeavours. The first of these came when we co-supervised several students on the SA-YSSP (between 2012 to 2015) that was held at the University of the Free State, in Bloemfontein. This was a capacity-building initiative by the South African National Research Foundation, in conjunction with IIASA, and was modelled on the long-renowned YSSP that is held every summer in Laxenburg. During that time, we supervised doctoral students from a range of countries - South Africa, Honduras (via the US) and Malawi, among others. Our students were similarly from a wide range of topics: petro-politics in US-Africa relations and its environmental implications, for instance, acid mine drainage (AMD) in the coalmines of northeast South Africa, and reducing emissions from deforestation and forest degradation (REDD+) in Virunga, Democratic Republic of Congo.

At present, Mike and I are involved in doctoral supervision in connection with the Southern African Systems Analysis Centre (SASAC), which is the successor to the SA-YSSP and is jointly hosted by Stellenbosch University, the University of the Western Cape, the University of Witwatersrand and the University of Limpopo. Under this SASAC framework, each fellowship-holder has a South African supervisor and one from IIASA. Our student's research focuses on understanding the diverse and conflicting perceptions of risk (a long-standing topic within the RISK Program, as it is now named) and of vulnerability and governance among stakeholders in relation to the proposed mining of uranium in South Africa's Great Karoo: an area that enjoys UNESCO  world heritage biosphere status.

These collaborations have already yielded a number of scientific papers: on risk perceptions in the oil-rich Niger Delta region of Nigeria, on the critical evaluation of REDD+, and on governance in the extractive sector in Africa. Most notably, our projects also form the basis for a chapter in the forthcoming (2018) book - "Systems Analysis Approach for Complex Global Challenges" - that sets out what has been achieved within the various projects that made up the 2012-15 SA-YSSP. One important message from that volume is that, in Africa, it is the problems associated with cities and with resource extraction and not climate change that loom the largest. 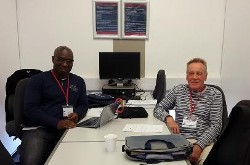 This long-term collaboration with the IIASA Risk and Resilience Program (RISK), all the way back to my YSSP days, has helped me understand systems analysis in governance across a number of contexts, particularly those involving environmental matters. For instance, current debates on natural resource management across the developing world, but particularly in Africa, tend to be framed in terms of climate change: a framing that is embraced by only some stakeholders, with those stakeholders (typically government actors) then exerting a policy "hegemony" that is exclusive of those who do not see things in that particular way. Such gulfs, once created, are difficult to bridge; indeed, they can sometimes result (as we can see in the Niger Delta) in violent conflict. Thinking from a "systems perspective", and thereby shifting course from a hard, singular and exclusive orientation to a softer pluralist model that can extend legitimacy to all the shareholder perspectives, allows us to move from destructive conflict to constructive compromise. Understanding governance from this perspective, as well as reconciling conflicting interests in environmental management, will protect the environment itself, which is all too often the victim in these sort of non-inclusive policy processes. As an East African saying has it: "When elephants fight it is the grass that suffers".

One consequence of this hard-to-soft "shifting of course" is that our collaboration aligns closely the RISK/EEP cross-cutting project on "The Equitable Governance of Common Goods", while at the same time alerting IIASA to concerns - such as resource extraction and cities - that loom large in Africa but less so in the more developed North.

Ike meets former 2009 YSSPers at IIASA during his Nov. visit

Ikechukwu (Ike) Umejesi holds a PhD in environmental sociology and currently teaches in the department of sociology, University of Fort Hare, East London Campus, South Africa. His research interest includes: mineral resource exploitation, land use, state-community contestations over environmental sovereignty, environmental risk, vulnerability and governance. He has published widely in these areas. Ike was a member of IIASA’s YSSP cohort of 2009. He was a supervisor in the Southern African Young Scientists Summer Program (SA-YSSP) and currently participates in the same capacity in the Southern Africa Systems Analysis Centre (SASAC) hosted by Stellenbosch University, the University of the Western Cape, the University of Witwatersrand and the University of Limpopo. SA-YSSP and SASAC are capacity-building collaborations between IIASA and the National Research Foundation (NRF) of South Africa. Ike is also a published novelist.