The 2012 presidential candidates aren’t likely to mention nuclear power during their campaigns, according to IIASA's former Director and current professor at the USC Sol Price School of Public Policy and the USC Viterbi School of Engineering. 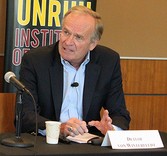 “If you take climate change seriously, meaning that you would like to keep the average temperature increase in the world to less than 2 degrees Celsius, nuclear power will have to grow as a major energy source over the next 40 years,” said von Winterfeldt during his talk, “The Future of Nuclear Power in the United States,” held last month at the Ronald Tutor Campus Center. More