Prof. Stephen Robinson is a member of the US National Member Organization Committee. He is currently visiting IIASA and engaging with the Advanced Systems Analysis (ASA) Program. Below is a recent interview taken during this visit. 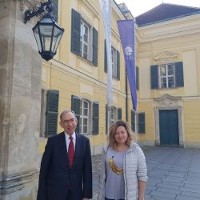 Stephen Robinson is currently Professor Emeritus at the College of Engineering at the University of Wisconsin in Madison and is a member of the US National Member Organization (NMO) Committee. During his current visit with the ASA Program and Elena Rovenskaya, the Program Director, we had the chance to sit down and talk about what IIASA means to him.

Your relationship with IIASA?

I first visited IIASA in 1975 for a conference. At that time IIASA was very new, and I was very impressed with the idea of an institute like this that would be dealing with problems that were too big and/or too complicated for single nations to work on. I thought this was a very good thing to have and kept in touch with IIASA since that visit.

I was conducting research in optimization, which was of interest to IIASA, and was invited to come back several times in the following years. This gave me the opportunity to see the way IIASA functioned under several different directors and which subjects were important to the institute. For me, this was fascinating to see. Then, in 2014 I joined the US NMO Committee. I'm still very fascinated that there's a place like this that has made immense contributions that have impacted society.

A couple of examples come to mind. One was the modeling and policy issues Acid Rain tackled. This was a real problem, and IIASA did important work toward finding a solution. Another case was in the population group, which I believe was the first to properly predict that the population in the world would not simply continue to go up, as some alarmists were saying at that time, but in fact would come to a point of levelling off and probably declining at some rate. This was revolutionary at that time as no one was saying this, and it came out of IIASA. I'm very impressed with what IIASA has been able to accomplish and hope it will continue doing these kinds of things that our society needs.

Why are you visiting IIASA today?

In the past, my visits focused on research, and this is a very different visit. Most of the topics I'm dealing with now relate to the ASA Program. This program is important because it works on new mathematical methodology and the implementation of those methods, for example in computing. Methods of this kind can support the work done in several of the other programs at the institute.

An example from last year entails ASA researchers developing a process for optimizing investment in things that are not exactly predictable, such as catastrophic events. An ASA researcher together with an ESM researcher were able to develop a technique that can be used to optimize investment in minimizing the loss from catastrophic events, which brings down the costs of insurance and can save a lot of money. They applied this technique in a case study against flooding in a region of the Netherlands. Insurance companies had been using standard calculation methods, which worked well for estimating common losses like automobile accidents, but not for events like flooding. The new technique showed that the cost of insurance could be cut considerably for these events. This was something new; it benefited society, and it came from IIASA ASA work.

The goals of the US NMO?

The NMO has two main functions according to its charter, if you want to call it that. The first is oversight of IIASA, in the sense of being aware of what's going on at IIASA and being able to express that to units of government in the United States. And the second is to create more knowledge and awareness of what IIASA is doing.

I'm very excited to be a part of the institute and am looking forward to this visit.

US NAS Board on International Scientific Organizations