Dr. Korfmacher recently visited her YSSP supervisor from 23 years ago and presented her current research to the RISK Program. 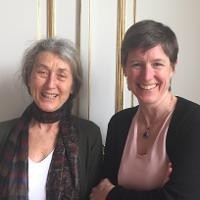 In 1993, Katrina Korfmacher arrived at IIASA to spend three months in the then Risk Analysis and Policy project with Joanne Linnerooth-Bayer as her YSSP supervisor.  Nearly 23 years later, Dr. Korfmacher returned to IIASA to present her current research regarding risk perception and hydrofracking in the Eastern United States. Following her talk, it was nice to catch up with Dr. Korfmacher regarding her visit to IIASA, her work, and her thoughts of how the YSSP influenced her life:

"My work as a policy scientist is primarily focused at the local level on issues of environmental health, and this was a great opportunity to think about those local issues from a global context. Joanne invited me to talk about the work I've done on risk perception on hydrofracking in the Eastern United States. We had a great conversation about the geographic, political, and cultural context of unconventional natural gas development in the Eastern United States compared to Europe and Africa and some of the other places her group is working, and then also the analogies between this energy development and some of the other issues they’re working on like water, floods and climate change.

I spoke about a community information assessment that was done five years ago in three states looking at how communities thought about hydrofracking and what their health concerns were. We did that to try and get a community perspective into the research agenda before the research agenda was set. In doing that, we discovered that understanding how people perceive risk around hydrofracking was very important and would be important to all kinds of studies. So we then developed a survey tool about risk perception that all kinds of researchers could use in their studies. Good questions followed relating what we found to where colleagues in RISK currently work and to the issues they work on. It's interesting for me to get this international perspective on the local work that I'm doing and to hear how different it is for them (RISK) as well as interesting to discover research connections and common interests.

Even though I do local work, getting a perspective while I was here during the YSSP on how local policy is different given different national policy frameworks, was really helpful. It enriched my view of local policy problems in the United States by trying to think about the same issues in a different context. So for example, when I was here we were looking at issues of fairness and ethics in considering water quality governance for the Nitra soon after the fall of the iron curtain with lots of changes and reductions in pollution, because industry had gone down, while considering the future of water governance and what would be in place. It freed me up to think about our system in a comparative perspective even though they’re local issues. That’s been most useful to me in my teaching but also in local policy work: to think this is the system we are working within but it’s not a given - it could be different. That can feed into creating ideas.

I've also stayed in touch with some of the people I met during my YSSP - more socially than professional, and we're all in different fields. On this trip I met my friend Anu, who was a Finnish YSSP, and her family, and three years ago we met with a YSSPer from the Netherlands and his family. We all have kids the same age and having that cultural connection between the kids has been interesting as well.

It was nice to have the opportunity to come back and hear how Joanne's work has evolved, and that there’s still a lot of parallel themes to what I worked on here. The same themes have developed through the research I’ve done since and are still present in the work I’m working today."

Katrina Korfmacher at the University of Rochester Medical Center