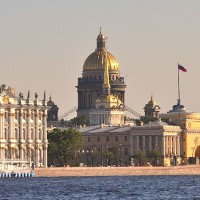 St. Isaac's Cathedral and the Admiralty building next to the Neva River in St. Petersburg © Dreamstime

Over the last decade, SPIEF has become an international platform for the discussion of the key economic issues facing Russia, emerging markets, and the world as a whole. Participants include government and business leaders from the emerging economic powers, as well as leading global voices from academia and the media. SPIEF first took place in 1997 and since 2006 it has been held under the auspices of the President of the Russian Federation, who has also attended each event. Among high-level guests of this year’s Forum were Secretary-General of the United Nations Ban Ki-moon, President of the European Commission Jean-Claude Juncker, Chairman of the Board of the Eurasian Economic Commission Tigran Sargsyan, Prime Minister of the Italian Republic Matteo Renzi, President of Kazakhstan Nursultan Nazarbayev and ex-President of the French Republic Nicolas Sarkozy.

Professor Kabat attended various sessions as a panelist and participant, including the Panel Session Boosting the Bottom Line with Clean Tech on 17 June with Sergei Ivanov, Chief of Staff of the Executive Office of the President of the Russian Federation; Olivier Adam, Deputy Regional Director, Regional Bureau for Europe and CIS, United Nations Development Programme (UNDP); Christian Friis Bach, Executive Secretary of the Economic Commission for Europe (ECE), the United Nations (UN); Sergey Donskoy, Minister of Natural Resources and Environment of the Russian Federation; Leonid Mikhelson, Executive Director, Chairman of Management Board, Novatek; Jean-Pascal Tricoire, Chairman, Chief Executive Officer, Schneider Electric; Victor Vekselberg, Chairman of the Board of Directors of Renova Group, President of the Skolkovo Foundation; Christian Kaufmann, Finance Vice-President in Russia, Belarus, Ukraine, Unilever, and many others.

Many corporations have long proven that sustainable approaches to production and environmental management can strengthen a firm’s brand affinity and also have a positive impact on profits. Many Russian companies are investing heavily to improve the environmental impact of operations, but the dearth of funding to modernize facilities and deploy costly infrastructure, prevailing market volatility, and the need to resolve related social issues all present significant difficulties. What options do companies have for securing the necessary financing to introduce cleaner technologies? What support measures, including tax incentives, should governments adopt and what are some of the best global practices that can serve as a reference?

During his time in Russia, Professor Kabat had an opportunity to personally welcome Russian President Vladimir Putin and to hold meetings with a number of policymakers and leading experts in economy and science in Eurasia, including: 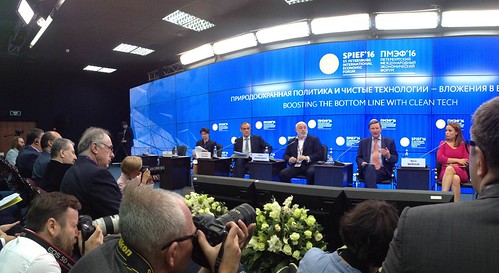