The Earth League, an IIASA research partner, is an international network of leading scientists working on pressing issues facing humankind today. This year’s annual symposium focused on the ambitions and challenges set out in the Paris climate agreement in 2015. 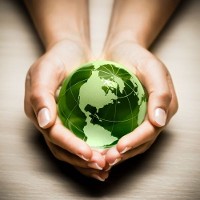 IIASA Director General and CEO Professor Dr. Pavel Kabat and IIASA Deputy Director General Nebojsa Nakicenovic, both founding members of the Earth League, attended the event as speakers. Kabat spoke on the research project The World in 2050 (TWI2050) on 23 January at 4.30pm. He also joined a discussion titled "Decarbonisation and a Global Transformation Roadmap" as a panelist on 24 January at 11am. Nakicenovic spoke as part of the Symposium’s theme “Transformation Now!” on "Innovations, Technologies and Scaling Up" on 23 January at 2.50pm.

On 24 January, Kabat had the opportunity to hold high-level meetings with leading experts in climate change and sustainability studies, including:

Rapid transformation is urgently on the agenda: humankind is on the brink of melting the Greenland and Antarctic ice caps, disrupting the resilience and diversity of the biosphere, affecting atmospheric and oceanic circulation and endangering the very planetary foundations upon which human progress has rested. Transitioning away from the combustion-based, increasingly outdated modes of operation of the 19th and 20th century to more advanced, sustainable practices in the 21st century now relies on vigorous self-amplification of transformative processes currently beginning in light of growing scientific understanding.

The success of the Paris climate agreement is by no means ensured; fulfilling its objectives requires ratcheting-up of ambitions through social, political and economic progress. It also requires debunking myths of allowable overshooting, climate engineering and no-regrets adaptation.

On the contrary, renewable energies are a program of potential empowerment of the poor, making decarbonization one of the great program for development in this century. The core dynamics of this program lie in civilisatory progress in all of its forms: social, cultural, political and economic. The challenge for science is twofold: to consider the biophysical Earth with its human worlds as one whole system, and to consider the opportunities and constraints in the dynamics of the social and technological systems that can save Earth from leaving the stable Holocene. This symposium will consider the post-Paris need to widening the view toward a handful of critical co-transformations that would allow pathways towards sustainable global development, and processes of their amplification toward tipping into the mainstream. Maintaining planetary boundaries is critical as much for reasons of environmental stability as it is for justice, but time is short. “Transformation now!” is clearly on the table for humankind as a centennial task.

This international group of prominent scientists from world‐class research institutions will work together to respond to some of the most pressing issues faced by humankind, as a consequence of climate change, depletion of natural resources, land degradation and water scarcity. The group will consider the options for wider use of climate-compatible energy sources; increased and sustainable world food production; and novel approaches to urban planning. The alliance will focus on how we can manage anthropogenic global change according to the principles of sustainable development. The Earth League aims to provide decision makers with multiple options for addressing pressing sustainability issues, by delivering robust background information and enhancing transparency of the choices available. By coming together in a self-organized alliance, the Earth League members will be a united voice in the global dialogue on planetary issues. The members of the Earth League will meet on an annual basis.