Ambassador of the Republic of Kazakhstan visits IIASA

H.E. Kairat Sarybay, Ambassador and Permanent Representative of the Republic of Kazakhstan to Austria and to the International Organizations in Vienna met with IIASA Director General and CEO Professor Dr. Pavel Kabat to discuss IIASA research and potential ways of enhancing collaborations. 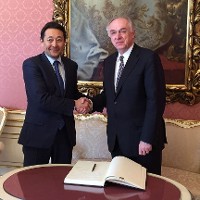 One of the main topics of discussions was the IIASA initiative on the Challenges and Opportunities of Economic Integration within a Wider European and Eurasian Space, which has been running since 2014. The project conducted a series of roundtables on critical issues of economic relations between the European Union (EU), the Eurasian Economic Union (EAEU), and their neighbors, including the countries of the EU Eastern Partnership, Central and East Asia. The initiative, which is independent of any national or political interest, assesses the economic relations and prospects for long-term win-win cooperation in Greater Eurasia. Kabat informed Sarybay, that having successfully passed through the initial phase, IIASA is now preparing to launch the research phase of the project. The aim is to conduct an in-depth and comprehensive study across the major relevant sectors in Greater Eurasia in order to offer to policy makers and the business community a set of plausible scenarios for economic integration between the core players in Greater Eurasia.

Sarybay expressed an interest in the active participation of different Kazakh stakeholders in the initiative. During the meeting they also discussed possible IIASA scientific input to the OSCE Economic and Environmental Dimension, and relevant international events to be held in the Republic of Kazakhstan this year, which might be of interest for IIASA scientists to contribute their expertise. 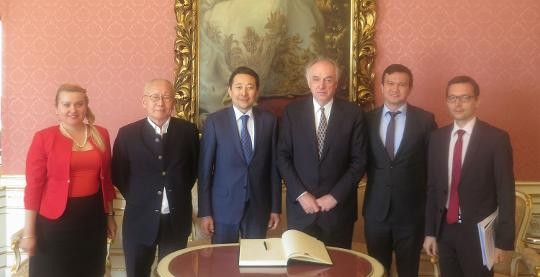 The international and interdisciplinary initiative "Challenges and Opportunities of Economic Integration within a wider European and Eurasian Space," coordinated by IIASA, aims to discuss and analyze critical issues of economic cooperation between the enlarged EU, CU/SES, and their neighbors, including the key Asian players, such as China, Korea, and Japan. This could lay the foundations for a broader pan-European/Eurasian Economic Space "from Lisbon to Vladivostok" or even wider integration "from Lisbon to Shanghai."

The two-year initiative consists of a series of workshops at which specific aspects of integration will be discussed by scientists and stakeholders representing all interested regions. Follow-up discussion summaries, notes, opinion papers, position papers, and other publications will outline the state of the art in this field and reflect on different futures.