IIASA and the Netherlands

IIASA Director General and CEO Professor Dr. Pavel Kabat will make a visit to the Netherlands on 18-21 December 2017, in order to enhance collaborations between the Netherlands and IIASA. 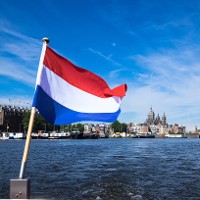 During the visit Kabat will meet with members of the Netherlands Government and Netherlands academia, to further strengthen cooperation between the Netherlands and IIASA, which has been a member of IIASA since 1977. Meetings will include:

Christiaan Wallett, Operations Director at the Global Center of Excellence on Climate Change and Researcher at the Ministry of Infrastructure and Water Management of the Netherlands (IenW); Henk Ovink, Special Envoy for International Water Affairs and the Netherlands Sherpa to the United Nations and World Bank High Level Panel on Water; Ed Nijpels, Social and Economic Council of the Netherlands; and Marcel Beukeboom, Climate Envoy to the Netherlands.

Kabat will attend the Directors Meeting of the Delta Alliance at the IHE Delft Institute for Water Education, which runs in partnership with UNESCO. He acts as Chair of the International Advisory Board of the Delta Alliance. While here, he will also attend the launch of the book 'The State of the Delta'' by Han Meyer, Professor of Urban Compositions - Department of Urbanism, at Delft University of Technology. During the launch he will take part in a debate, where panelists are invited to give their own reflections and different perspectives on the current state of the delta.

Delta Alliance is an international knowledge-driven network organization with the mission of improving the resilience of the world’s deltas. With increasing pressure from population growth, industrialization and a changing climate, it is more important than ever that these valuable and vulnerable locations increase their resilience to changing conditions. Delta Alliance brings people together who live and work in deltas, so they can benefit from each other’s experience and expertise and as such contribute to an increased resilience of their delta region, with the help of network wings.

Kabat will attend the defense as Project Leader and Supervisor along with other collaborators including Laixiang Sun, Senior Research Scholar, IIASA Water Program and Jim Hall, Director, Environmental Change Institute at Oxford University and a member of the IIASA Science Advisory Committee (SAC).

About IIASA and the Netherlands

Joint studies focus on the complex global systems that affect the Netherlands, its economy, and its people. Research topics include identifying measures that simultaneously tackle air pollution and greenhouse gas emissions, analyzing the impact of demographic change in the Netherlands and optimizing strategies to increase flood resilience.

INFOSHEET ON IIASA ACTIVITIES WITH THE NETHERLANDS