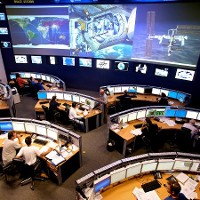 During the visit he met with the Chair of the DLR Executive Board, Pascale Ehrenfreund and Head of the Department of International Cooperation, Nicolas Peter.

The visit was in follow up to a joint workshop hosted by IIASA in July 2018, which brought together key researchers from both IIASA and the DLR to explore joint collaborations in the areas of integration of energy, transport & atmospheric data in sustainability models and remote sensing data interpretation and utilization.

The workshop led to a new Memorandum of Understanding (MoU) between IIASA and the DLR, which will establish further collaborations between the two institutes in these key research areas. The new MoU was officially signed by both parties during the visit.

Van Jaarsveld also visited and met representatives of the Institute of Atmospheric Physics and the DLR Earth Observation Center during his time at Oberpfaffenhofen. He was accompanied by Steffen Fritz, Acting Program Director and Earth Observation Citizen Science Center Head, IIASA Ecosystems Services and Management Program and Iain Stewart, Head of IIASA Communications and External Relations.

IIASA researchers have collaborated with DLR in the past, for example on the project Energy Use Impacts on the Environment (EnerGEO). The project, which ran from 2009-2013, assessed the current and future impact of energy use on the environment by linking environmental observation systems with the processes involved in exploiting energy resources. 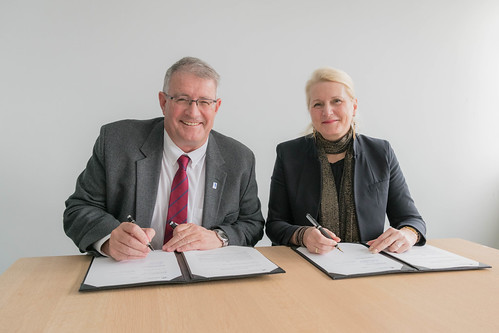 Research collaborations between IIASA and Germany have been highly productive throughout IIASA history. Since 2010, this cooperation has involved over 70 German organizations and led to over 1,200 joint scientific publications and wide-ranging policy advice delivered via organizations such as the German Advisory Council on Global Change (WBGU).

Joint studies focus on the complex global systems that affect Germany, its economy, and its people. Research topics include transformation paths to a sustainable energy system, the impact of demographic change in Germany and optimizing strategies to reduce greenhouse gas emissions. These activities are complemented by scientific exchange with over 1000 researchers visiting Germany from IIASA and over 760 researchers, advisors and diplomats visiting IIASA from Germany.

Beyond continuing these research collaborations, there is significant opportunity to grow the relationship between IIASA and the German scholarly community, through joint research projects, scientific exchange and collaborative capacity building activities. Opportunities for such activities will be facilitated through the forthcoming IIASA strategic plan 2021-2030 and new IIASA membership strategy, which the Association for the Advancement of IIASA are helping to shape via their role on the IIASA governing council.