Challenges and opportunities of the Arctic region: Launch of new scientific report

In collaboration with the Ministry for Foreign Affairs of Finland, IIASA will present a major new scientific analysis of the Arctic – a region on the front lines of climate change, geopolitics, and global governance. 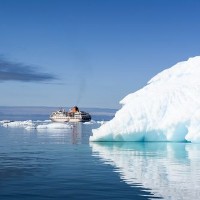 The event brings together leaders from academia and governments to highlight the importance of the Earth’s most remote frontier: An area, claimed by eight states and inhabited by dozens of groups of Indigenous people, that is changing fast due to the effects of global warming. In the report Arctic Policies and Strategies, IIASA alumni Lassi Heininen, Karen Everett, Barbora Padrtova, and Anni Reissell, analyzed 56 key policy documents to identify trends in Arctic governance and geopolitics. It considers how different Arctic actors define and address issues around the human dimension, governance, environmental protection, climate change, safety, economy, and science. The report was produced as part of the IIASA Arctic Futures Initiative and was co-funded by the Ministry for Foreign Affairs of Finland and IIASA.

Jan Marco Müller, IIASA Acting Chief Operations Officer, and Ossi Piironen, Senior Researcher with the Ministry for Foreign Affairs of Finland, will offer opening remarks. This will be followed by an introduction to the report, including an overview of Arctic policies and strategies, by Lassi Heininen, University of Helsinki.

The Arctic Futures Initiative (AFI) brings a systems analysis perspective to the future of the Arctic. The Arctic interacts with the rest of the world in a complex manner —socially, economically, technologically, environmentally, and politically. The initiative aims to support the requisite system-level analysis of critical Arctic challenges to sustainability, for use by public and private decision makers in the Arctic and non-Arctic nations striving for a sustainable Arctic region.