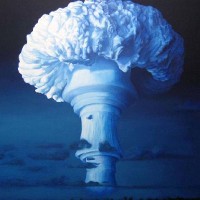 Anthropo/Sphere featured 22 artworks focusing on art as a mirror of science and the blending of scientific themes and imagery. Jalufka specifically focuses on Geology, Astronomy, Climate Change, and Evolution. At IIASA – home to many scientific areas, highlighting the interactions between humans and nature and their consequences – Jalufka’s artworks were presented in a scientific context, emphasizing an interdisciplinary approach.

The event took place in the IIASA gallery in the Kaisergang of Schloss Laxenburg.

17:00 Joint Opening of the Exhibition by Pavel Kabat, Director General and CEO of IIASA and Robert Dienst, Mayor of the City of Laxenburg

The opening was followed by a drinks reception with fine wines from the Uibel Winery, Weinviertel

Geological Evidence 2007: The inspiration for this triptych was taken from geological thin sections of the Cretaceous-Tertiary (K/T) mass extinction boundary. While this is a relatively realistic depiction of what one would see looking through a microscope, form an artistic perspective, it becomes pure abstraction. © Dona Jalufka

I have chosen Anthropo/Sphere as the title for this exhibit, derived from the combination for the terms “Anthropocene” and “Sphere” because it combines two scientific themes that are prevalent in my work and also that of IIASA’s. The first part, “Anthropocene”, is a proposed new geological era, which is suggested to highlight the human influence on our planet and its geological processes. The second part, “Sphere”, recognizes the sphere of our influence that humans have on nature (and vice versa), as much as the spherical character of many bodies within our reach (such as the earth or the moon). Its form is a constant in the natural world, and emphasizes the cyclical nature of many natural and man-made processes. 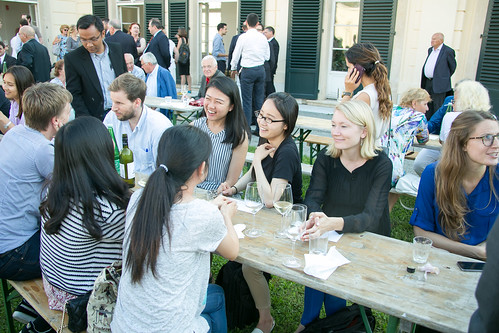 IIASA Gallery in the Kaisergang