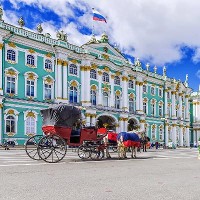 SPIEF is one of the major international platforms for the discussion of key economic issues facing Russia, emerging markets, and the world as a whole. It is held under the auspices of the President of the Russian Federation, who has also attended each event.

Participants of the forum include government and business leaders, prominent global voices from academia and the media, heads of international organizations, and Nobel Prize laureates. Among the guests of this year’s forum are many personalities IIASA has effective working relations with, including President of the Russian Academy of Sciences, Alexander Sergeev; Deputy Minister of Foreign Affairs of the Russian Federation, Alexander Pankin; Member of the Board (Minister) for Trade of the Eurasian Economic Commission, Andrey Slepnev; Rector of the Moscow State Institute of International Relations (MGIMO University), Anatoly Torkunov; Rector of the Russian Presidential Academy of National Economy and Public Administration (RANEPA), Vladimir Mau; and President of the Russian Union of Industrialists and Entrepreneurs (RSPP), Alexander Shokhin.

Policy decisions that are informed by science are critically important to building a sustainable future. IIASA is an active promotor of science diplomacy and one of the leading institutions operating at the science-policy interface. To provide scientific input to the discussions, Dr. Rovenskaya will speak at the session “Preserving Cultural Diversity in the Age of Global Digital Platforms”. At the panel she will be joined by Anton Gorelkin, Member of the State Duma of the Federal Assembly (Parliament) of the Russian Federation; Alexander Zharov, Chief Executive Officer of Gazprom-Media Holding; Dzhanik Fayziev, General Producer of the Okko film company; and Anton Klyuchkin, General Director of the Internet Development Institute, among others.