The Hashemite Kingdom of Jordan became a prospective member of IIASA in 2020 through the Royal Scientific Society of Jordan. 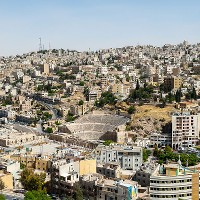 In recent years, representatives of research institutions in Jordan, officially the Hashemite Kingdom of Jordan, have explored ways to develop mutually beneficial collaborations between researchers at IIASA and in Jordan. With this goal, Memorandums of Understanding were signed between IIASA and the Higher Council of Science and Technology of Jordan in 2015 and the Royal Scientific Society of Jordan in 2017.

As a prospective member, the Royal Scientific Society of Jordan and IIASA will jointly explore the value of full membership of IIASA between June 2020 and June 2022. Specifically, they will jointly identify: (1) areas of mutual research interest that will benefit both Jordan, the Middle East, and IIASA; (2) mechanisms that will facilitate research collaborative activities; and (3) ways to overcome any barriers to research collaboration.

The Hashemite Kingdom of Jordan has joined IIASA as a prospective member through the Royal Scientific Society of Jordan.  More

IIASA to collaborate closely with Jordan

Following a visit by IIASA Director General and CEO Pavel Kabat to the Hashemite Kingdom of Jordan in March 2015, both IIASA and Jordan agree to closer cooperation.  More