As one of IIASA founding organizations, the Japan Committee for IIASA has helped develop a highly-productive relationship between IIASA and Japan. 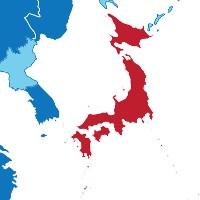 Research collaborations between IIASA and Japan have been highly productive since the institute was founded in 1972. This Info Sheet focuses on key aspects of this beneficial relationship since 2010, which has involved cooperation with more than 31 Japanese organizations and resulted in over 300 scientific publications and a range of research advances. Recent studies have included in-depth analyses of how to maximize the co-benefits from measures to reduce both air pollution and greenhouse gas emissions in Japan and Asia; the development of a new set of scenarios to underpin future climate modeling, impact, vulnerability, adaptation, and mitigation assessments; and research into the evolution of diseases and commercially-exploited fish. IIASA longstanding connections to business in Japan include the Toyota Motor Corporation and the Tokyo Electric Power Company, with collaborations focused on efficient and sustainable energy systems. Knowledge transfer between IIASA and Japan is also facilitated by multiple exchanges with Japanese researchers working at or visiting IIASA, and IIASA researchers visiting and attending events in Japan.

In addition, since 2010, 9 Japanese doctoral students and 2 postdoctoral fellows have gainedinternational and interdisciplinary research skills from IIASA programs for young scientists. 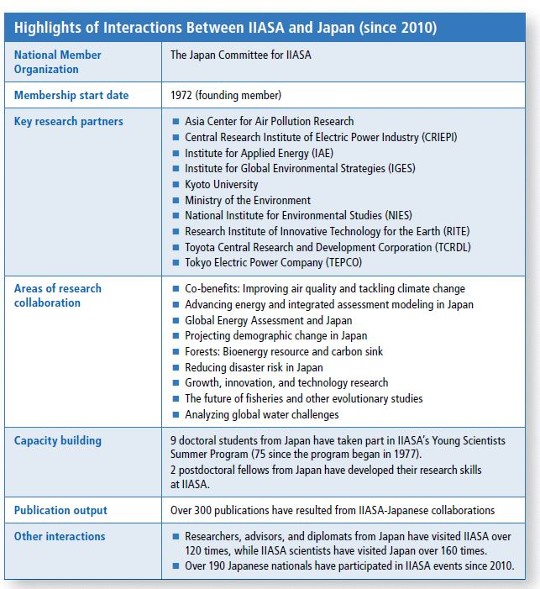 Opportunities for Japanese Researchers and Japanese Nationals at IIASA

The YSSP at IIASA offers fellowships for PhD students to undertake a summer project on a topic related to the IIASA research agenda. Applications for 2019 are now being accepted until 11 Jan 2019.

The Postdoctoral Program at IIASA offers fully funded research positions of up to two years to study topics related to the IIASA research agenda.

Currently IIASA employs approximately 170 scientific staff and 100 support staff. Preference for job applications is given to qualified applicants who are nationals of IIASA member countries.

IIASA supports the provincial government of Styria in co-creating together with a representative sample of the Styrian population courageous and positive visions for a low-carbon and climate resilient future.  More

A new study has found that older Europeans are more likely to stick to pandemic rules if they think they are unhealthier than they actually are.  More

The increasing amounts of municipal solid waste and ineffective waste management systems threaten the environment and contribute to climate warming, yet the waste sector is often neglected in discussions about climate change and air pollution. A new IIASA-led study shows, for the first time, how circular waste management systems can help to effectively curb emissions of greenhouse gases and air pollutants.  More

In collaboration with the Egyptian Academy of Scientific Research and Technology and the Institute of National Planning, IIASA is proud to announce the launch of the Northern African Applied Systems Analysis Center (NAASAC).  More

How effective is the promotion of low-meat diets at reducing greenhouse gas emissions compared to carbon pricing when the effectiveness of mitigation policies is measured against methane’s long-term behavior? An international team of researchers explored how focusing either on the short- or long-term warming effects of methane can affect climate mitigation policies and dietary transitions in agriculture.  More