IIASA leadership joins call for action at the Vatican

On 28 April a high level event at the Vatican co-sponsored by the Sustainable Development Solutions Network (SDSN) called for an increase in awareness of the implications of climate change and the need for sustainable development. 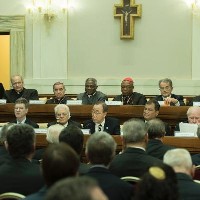 The one day international symposium organized by the Pontifical Academy of Sciences, explored the moral issues connected to climate change, and included a video message from Pope Francis about the Christian imperative of stewardship of creation. Ban Ki-moon commented that he had a “fruitful and wide ranging conversation with the Pope and he commended participants in the symposium for raising awareness of the urgent need to tackle climate change and promote sustainable development”.

Vatican officials were joined by high-level invitees including science, business, diplomatic, and development experts, religious leaders, and academicians and scholars. Participants contributed to and signed a Declaration stating that “Human-induced climate change is a scientific reality, and its decisive mitigation is a moral and religious imperative for humanity”.

The declaration says that humans have the technological and financial means, and the know-how, to combat human-induced climate change, while at the same time eliminating global poverty, and states that “The world should take note that the climate summit in Paris later this year (COP21) may be the last effective opportunity to negotiate arrangements that keep human-induced warming below 2-degrees C, and aim to stay well below 2-degree C for safety, yet the current trajectory may well reach a devastating 4-degrees C or higher.”

The statements are likely to influence the Pope's coming Encyclical on climate change, which is expected to describe action to cut emissions as "a moral and religious imperative, highlighting the intrinsic connection between respect for the environment and respect for people - especially the poor, children, and future generations".

During the event Cardinal Peter Turkson, the president of the Pontifical Council for Justice and Peace, delivered an address calling for a moral awakening of politicians and people of faith.  “In our recklessness, we are traversing some of the planet’s most fundamental natural boundaries,” warned Turkson. “And the lesson from the Garden of Eden still rings true today: pride, hubris, self-centredness are always perilous, indeed destructive. The very technology that has brought great reward is now poised to bring great ruin.”

Launched by UN Secretary-General Ban Ki-moon in August 2012, the Sustainable Development Solutions Network (SDSN) mobilizes scientific and technical expertise from academia, civil society, and the private sector in support of sustainable development problem solving at local, national, and global scales. They aim to accelerate joint learning and help to overcome the compartmentalization of technical and policy work by promoting integrated approaches to the interconnected economic, social, and environmental challenges confronting the world.

IIASA Distinguished Visiting Fellow Jeffrey Sachs is Director of the SDSN, and IIASA Director General and CEO Pavel Kabat is a member of the Leadership Council. Earlier this year IIASA and the SDSN jointly launched a new project The World in 2050, in collaboration with the Stockholm Resilience Center with the aim to develop pathways to achieve sustainable development within a safe and just operating space of a stable planet.

International research for a sustainable future

The two research projects are complementary efforts among leading global research institutes and financing and development organizations to bridge a gap between science and policy. They aim to address outstanding questions on sustainability, climate, social equity and the environment, and provide pathways for the world to reach the future we want.

Towards a sustainable future

The World in 2050:&nbsp; Pathways towards a sustainable future