A new book including IIASA research takes stock of climate change impacts on food and agriculture at global and regional levels. 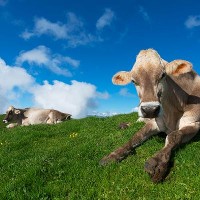 Global warming will have profound consequences on where and how food is produced, and also lead to a reduction in the nutritional properties of some crops, all of which has policy implications for the fight against hunger and poverty and for the global food trade, according to a new book, Climate Change and Food Systems, released today by the Food and Agricultural Organization of the United Nations (FAO).

The new book collects the findings of a group of scientists and economists who have taken stock of climate change impacts on food and agriculture at global and regional levels. The book examines the linkages between climate change, water resources, and food supply, and emphasizes the key role of technological and policy adaptation measures. The book also examines the co-benefits and trade-offs of different policy options for agricultural adaptations. Read more on the FAO Web site.

Havlík is the leader of the IIASA Global Biosphere Management Model (GLOBIOM) team. He and his colleagues developed the model to analyze competition for land and water between agriculture, forestry, and bioenergy, as well as the linkages between agricultural systems, climate change, and economics.

The analysis by IIASA researchers is the first one to consider in detail climate change impacts on the livestock sector. In particular, the paper discusses the potential role that restructuring agricultural production systems could play in adaptation. Grasslands seem to be relatively favored by climate change compared to croplands which in turn could lead to slowing down the decline in grazing systems. However, large uncertainties remain about the magnitude and even direction of climate change impacts. That means that for adaptation planning, it is important to keep as many doors open as possible.

Energy and nature in the Alps: a balancing act

For biofuels and climate, location matters