Community participation and strong social networks can aid preparedness to natural disaster such as tsunamis in vulnerable regions, shows new research conducted in the south of Thailand. 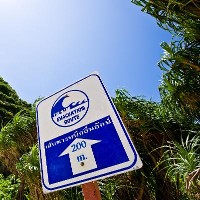 People who participate in social activities in their community are more likely to plan and prepare for future disasters, such as tsunamis, according to a new study published in the journal PLOS ONE.

The study was based on household surveys in tsunami-prone areas of Phang Nga, Thailand, a region which was hard hit by the 2004 Indian Ocean Tsunami, and which has been active in setting up tsunami early warning systems and disaster training programs.

“We found that in tsunami-prone areas, people who have participated in community activities are more likely to undertake disaster risk reduction actions,” says IIASA researcher Raya Muttarak, who led the study. “These include not only low-effort actions like following disaster-related news closely but also higher-effort actions like having a family emergency plan or having an intention to migrate.”

Previous IIASA research has shown that education, in particular women’s education, is connected with reduced vulnerability to natural disasters. The new study supports these findings, showing that in communities where more women had at least secondary school education, more people planned for disaster risk reduction. In addition, the researchers found a strong link between social engagement, or participation in social, sports, and religious activities in a community, and taking actions to prepare for a potential natural disaster.

“We don’t know if this is a causative link or whether people have some underlying characteristic that leads to these behaviors,” says Nopphol Witvorapong, an economist at Chulalongkorn University in Bangkok, Thailand and study co-author.. However, he says, the study is one of the first to account for unobserved characteristics and show evidence for a link between social activities and disaster preparedness, and suggests that further research is needed.

“While there is increasing discussion about the role of social engagement in disaster preparedness, until now there has been little evidence-based research on the topic,” says Wiraporn Pothisiri, a demographer at Chulalongkorn University.  In order to gather such data, Pothisiri and Muttarak carried out a household survey of over 500 families in Phang Nga immediately after the 2012 Indian Ocean earthquakes using the earthquake events as a test for disaster preparedness in the region .

The researchers then analyzed the data using a statistical model to explore whether there were links between social engagement in the community, and disaster preparedness efforts including following disaster-related news closely, preparing a family emergency plan or a disaster supplies kit, or planning to migrate to a lower risk area.

The researchers say that community activities and social networks cannot replace early warning systems and disaster training, but rather that they can complement and promote diffusion of such efforts.

“Our research suggests that the success of these disaster reduction efforts may depend on social cohesion and networks in a community. Promoting bottom-up disaster reduction strategies will be more sustainable than the top-down ones,” says Witvorapong