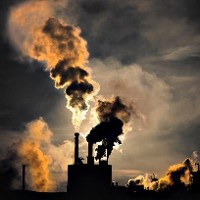 Limiting warming to any level requires CO2 emissions to be kept to within a certain limit known as a carbon budget. Can reducing shorter-lived climate forcers influence the size of this budget? A new IIASA study published in the journal Environmental Research Letters analyzes the impact of short-lived air pollutant and greenhouse gas reductions on carbon budgets compatible with the 2°C climate target.

Short-lived greenhouse gases and atmospheric pollutants—including methane, hydrofluorocarbons (HFCs), black carbon or soot, and sulfates— are emitted by human activities and also contribute to climate change, but remain in the atmosphere for a much shorter time than carbon dioxide (CO2).

Some of these emissions, such as methane have a strong warming effect, while others act to cool the atmosphere, making their role in climate change mitigation complicated to nail down.

“To limit global warming to any level, the total amount of carbon-dioxide emissions needs to be limited to a certain budget,” says Rogelj. “We knew that warming from non-CO2 gases like methane or some air pollutants, can influence the size of this carbon budget. The question was, how much?”

The new study is the first to quantify the influence of non-CO2 emissions reductions for future global carbon budgets.

“Our findings are important from a policy perspective. The pressure on the 2°C compatible CO2 budget will be extremely high if we are not successful in mitigating non-CO2 emissions for example from meat and rice production,” says IIASA Energy Program Director Keywan Riahi, a co-author on the study. “Hedging against these risks requires us to not put all of our eggs into one basket, and instead to pursue stringent reductions of CO2 in combination with efforts to limit non-CO2 emissions.”

IIASA research has shown that climate and air pollution are closely linked from an economic and policy standpoint, and addressing both together could bring joint benefits for health and environment at a fraction of the cost. For example, a recent study led by Rogelj quantified how actions to reduce CO2 emissions would also lead to reduced SLCP emissions, because CO2 and some SLCPs are emitted by the same sources, for example diesel engines which emit both CO2 and black carbon. Yet, the other way around, air pollution measures alone would not reduce carbon dioxide emissions.

The new study takes that research a step further and applies it to carbon budgets. It provides a quantitative scenario analysis of how reductions of black carbon, methane, HFCs, sulfur dioxide and nitrogen dioxide can complement and help the transition to a zero-carbon future.

IASA research has shown that climate and air pollution are closely linked from an economic and policy standpoint, and addressing both together could bring joint benefits for health and environment at a lower cost than addressing these issues separately.

See the references below for more on the topic: