A new grant from the European Union Horizon 2020 framework program for research and innovation links climate mitigation and adaptation policies with broader sustainable development questions at a global and regional level. 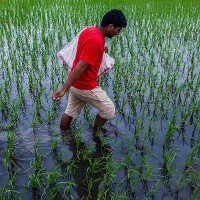 A farmer in India fertilizes his field as part of a climate smart agriculture program. © CCAFS/2014/Prashanth Vishwanathan

The new IIASA-led project, Linking Climate and Development Policies – Leveraging International Networks and Knowledge Sharing (CD-LINKS), will involve 16 institutions from 12 countries around the world. It aims to explore the linkages between climate adaptation and sustainable development, exploring both how the problems feed into one another, and how well-designed policies can have benefits across multiple climate mitigation, adaptation, and development issues.

“We know that climate adaptation is inextricably linked to development,” says IIASA Energy Program Director Keywan Riahi, the project leader. “However, most research has until now focused on one topic or the other, neglecting the connections between these areas.”

For example, economic development often brings with it greater energy use and resource consumption. These changes may in turn lead to greater levels of climate change, air pollution, or impacts on biodiversity. Meanwhile, policies aimed at one topic can have benefits for other areas: for example reducing the use of fossil fuels as a way to limit climate change can also reduce air pollution and thereby benefit health.

The core objective of the project is to develop national and global transformation pathways, that is, potential storylines that show how climate change mitigation could occur in conjunction with sustainable development objectives – including economic development, mitigation of energy poverty, air quality, water resources, food security, biodiversity, climate adaptation, and energy security—and what trade-offs and synergies will emerge between the interlinked goals.

Uniquely, the storylines will include local case studies, which will be linked with global pathways to ensure consistency in calculating factors such as energy use, fuel prices, and trade of carbon emission permits.

“This is not just a modeling project. We will use case studies around the world to identify the most effective policies, and we will bring researchers together to share this knowledge,” says Riahi.

“Each country is starting at a different place, and will develop in a different way,” explains IIASA researcher David McCollum, who is also working on the project. “That’s where this project comes in—it will provide information that can be used to make a plan of action, with specifics about what is needed in different places.”

“The consortium brings together national expertize from a range of countries together with global research teams to jointly explore the implications of the INDCs. The project plans also to be linked closely to the continuing international climate negotiations and the sustainable development process,” says Riahi.

In addition to research, the project includes a summer school and exchange program for participating institutions, as well as the development of decision-making support tools for policymakers.