IIASA research conducted for a new World Bank report shows the key role of agriculture and forestry in addressing the interlinked challenges of climate change and poverty. 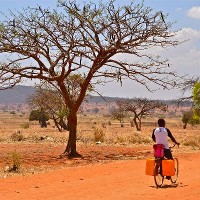 The report, Shock Waves: Managing the Impacts of Climate Change on Poverty, finds that poor people are already at high risk from climate-related shocks, including crop failures from reduced rainfall, spikes in food prices after extreme weather events, and increased incidence of diseases after heat waves and floods. It says such shocks could wipe out hard-won gains, leading to irreversible losses, driving people back into poverty, particularly in Africa and South Asia.

IIASA researchers in the Ecosystems Services and Management Program contributed an integrated modeling assessment using the IIASA Global Biosphere Management Model (GLOBIOM), focused on the agriculture and forestry sectors in the developing world. Their study is one of the few available analyses assessing both climate change impacts and the collateral effects of mitigation policies in a consistent framework.

They found that climate change could result in global crop yield losses as large as 5% by 2030 and 30% by 2080.  The impact of climate change on food prices in Africa could be as high as 12% in 2030 and 70% by 2080 – a crippling blow to those nations where food consumption of the poorest households amounts to over 60% of total spending. The effects of mitigation policies on food prices in Africa would be smaller but still significant; an increase of 7% in 2030 and 39% in 2080.

The report, which also examined factors such as health and exposure to natural disasters, found that impacts on agriculture will be the main driver of any increase in poverty.

“Agriculture and forestry are among the sectors most sensitive to the impacts of climate change. However, depending on how mitigation policies are implemented for the agricultural sector, the negative effects of mitigation could be worse than the effects of climate change itself in the medium term,” says IIASA researcher Petr Havlík, who, led the institute’s contribution to the report together with Hugo Valin.

Shock Waves : Managing the Impacts of Climate Change on Poverty