With a mobile data collection app and satellite data, scientists may be able to project whether a certain region is vulnerable to food shortages and malnutrition. The method has now been tested in the Central African Republic. 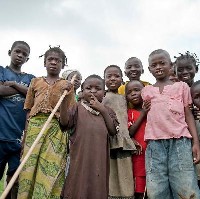 There are different possible causes for famine and malnutrition—not all of which are easy to foresee. Drought and crop failure can often be predicted by monitoring the weather and measuring soil moisture. But other risk factors, such as socio-economic problems or violent conflicts, can endanger food security too. For organizations such as Doctors without Borders / Médecins Sans Frontières (MSF), it is crucial to obtain information about vulnerable regions as soon as possible, so that they have a chance to provide help before it is too late.

Scientists from TU Wien in Vienna, Austria and the International Institute for Applied Systems Analysis (IIASA) in Laxenburg, Austria have now developed a way to monitor food security using a smartphone app, which combines weather and soil moisture data from satellites with crowd-sourced data on the vulnerability of the population, e.g. malnutrition and other relevant socioeconomic data. Tests in the Central African Republic have yielded promising results, which have now been published in the journal PLOS ONE.

Step one: satellite data
“For years, we have been working on methods of measuring soil moisture using satellite data”, says Markus Enenkel (TU Wien). By scanning the Earth’s surface with microwave beams, researchers can measure the water content in soil. Comparing these measurements with extensive data sets obtained over the last few decades, it is possible to calculate whether the soil is sufficiently moist or whether there is danger of droughts.

“This method works well and it provides us with very important information, but information about soil moisture deficits is not enough to estimate the danger of malnutrition,” says IIASA researcher Linda See. “We also need information about other factors that can affect the local food supply.” For example, political unrest may prevent people from farming, even if weather conditions are fine. Such problems can of course not be monitored from satellites, so the researchers had to find a way of collecting data directly in the most vulnerable regions.

“Today, smartphones are available even in developing countries, and so we decided to develop an app, which we called SATIDA COLLECT, to help us collect the necessary data”, says IIASA-based app developer Mathias Karner. For a first test, the researchers chose the Central African Republic– one of the world’s most vulnerable countries, suffering from chronic poverty, violent conflicts, and weak disaster resilience. Local MSF staff was trained for a day and collected data, conducting hundreds of interviews.

“How often do people eat? What are the current rates of malnutrition? Have any family members left the region recently, has anybody died? – We use the answers to these questions to statistically determine whether the region is in danger”, says Candela Lanusse, nutrition advisor from Doctors without Borders. “Sometimes all that people have left to eat is unripe fruit or the seeds they had stored for next year. Sometimes they have to sell their cattle, which may increase the chance of nutritional problems. This kind of behavior may indicate future problems, months before a large-scale crisis breaks out.”

A map of malnutrition danger
The digital questionnaire of SATIDA COLLECT can be adapted to local eating habits, as the answers and the GPS coordinates of every assessment are stored locally on the phone. When an internet connection is available, the collected data are uploaded to a server and can be analyzed along with satellite-derived information about drought risk. In the end a map could be created, highlighting areas where the danger of malnutrition is high. For Doctors without Borders, such maps are extremely valuable. They help to plan future activities and provide help as soon as it is needed.

“Testing this tool in the Central African Republic was not easy”, says Markus Enenkel. “The political situation there is complicated. However, even under these circumstances we could show that our technology works. We were able to gather valuable information.” SATIDA COLLECT has the potential to become a powerful early warning tool. It may not be able to prevent crises, but it will at least help NGOs to mitigate their impacts via early intervention.