There are significant constraints to large-scale deployment of negative emissions technologies in the future to reach climate change targets, according to a new study including IIASA research. The study emphasizes that greenhouse gas emissions must be reduced aggressively and immediately. 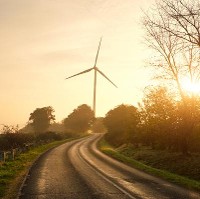 Negative emission technologies aim to remove carbon dioxide (CO2), a major driver of climate change, from the atmosphere. They include relatively simple options like planting more trees to lock up CO2 as they grow, or crushing rocks that naturally absorb CO2 and spreading them on soils so that they remove CO2 more rapidly. Other higher-tech options include using chemicals to absorb CO2 from the air, or burning plants for energy and capturing the CO2 that would otherwise be released, then storing it permanently deep below the ground, called bioenergy with carbon capture and storage (BECCS).

The work was carried out by a team of 40 collaborators on behalf of the Global Carbon Project (GCP), including nine IIASA researchers. The idea for the study was sparked at a GCP workshop on negative emissions at IIASA in 2013. IIASA scientists worked on the synthesis of the current literature on the biophysical limits to bioenergy and afforestation, and contributed to the analysis of BECCS deployment in the scenarios for the latest IPCC report.

The research considers the impacts of negative emission technologies on land use, greenhouse gas emissions, water use, earth’s reflectivity, and soil nutrient depletion, as well as the energy and cost requirements for each technology. The study shows that there are many such impacts that vary across technologies. These impacts need to be satisfactorily addressed if negative emission technologies are to play a significant role in achieving climate change goals.

The study confirms and warns that future use of negative emissions should not be interpreted as a fall-back option, which would be risky, as continuing to cumulate emissions would entail lower chances of stabilizing climate change at less than 2ᵒC. As the deployment of these technologies will likely be limited due to any combination of the environmental, economic or energy constraints examined in the study, “Plan A” must be to reduce greenhouse gas emissions aggressively now. A failure to initiate such aggressive emissions cuts may leave us with no “Plan B” to stabilize the climate within the 2ᵒC target.

“Climate mitigation efforts must come first and must be immediate—but even with vigorous mitigation efforts, there is a still a chance of overshooting the 2ᵒC target.  The paper assesses how negative emissions could help us stabilize the climate in that case.  It shows that for this ‘plan B’ to be on the table, we will need vigorous development, deployment and acceptance of technologies like sustainable biomass in conjunction with carbon capture and storage,” says IIASA Deputy Director Nebojsa Nakicenovic, a co-author on the paper and a co-chair of the GCP scientific steering committee.

“Negotiators at the climate summit in Paris must realize that betting on negative emissions doesn’t release us from cutting down on carbon now,” says co-author Sabine Fuss, a researcher at the Mercator Research Institute on Global Commons and Climate Change (MCC) and at IIASA, who also serves on the GCP scientific steering committee. “Our research shows that there are limits to the different negative emissions technologies – some demanding vast areas of land, some being energy-intensive. Therefore, future research should look not only on BECCS, but continue to explore all carbon dioxide removal options: we will probably be dependent on the full deck of cards, even if we don’t end up playing all of them.”