IIASA Deputy Director General Nebojsa Nakicenovic and other members of the IIASA network will serve on a scientific advisory group to support the implementation of the Sustainable Development Goals. 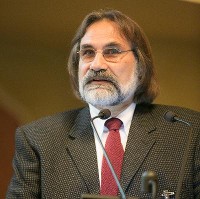 IIASA Deputy Director General Nebojsa Nakicenovic has been appointed by UN Secretary General Ban Ki-Moon to serve on a special advisory group from civil society, the private sector and the scientific community which will support the Technology Facilitation Mechanism, a key part of the post-2015 architecture for the implementation of the Sustainable Development Goals. Also named to the group were IIASA Distinguished Visiting Fellow William Colglazier, and Peter Bakker, who is a member of the Alpbach-Laxenburg Group.

After an extensive and open selection process, the Secretary General selected 10 individuals to be invited to serve in their personal capacity on the 10-Member Group to support the Technology Facilitation Mechanism. The group, working with the UN interagency task team, will prepare the meetings of the multi-stakeholder forum, support the development and operationalization of the online platform and provide briefings and other inputs to the high-level political forum on sustainable development.

Nakicenovic was nominated for the post by the International Council for Science (ICSU). He is a former member of ICSU Committee on Scientific Planning and Review, and long-standing contributor to ICSU’s activities.

BOX: IIASA research and the SDGs

IIASA is leading new research projects providing scientific support for the implementation of the SDGs to 2030 and beyond:

In addition, IIASA research on energy and climate played an important role in several of the SDGs: the 2012 Global Energy Assessment provided the backbone for the quantitative goals in SDG7, which is focused on energy. IIASA research related to climate change has also provided important inputs to SDG13, which is focused on climate change mitigation.

IIASA researchers have also already begun working closely with policymakers on questions about SDG implementation. At the Alpbach-Laxenburg Group meeting earlier this month, the group released a statement identifying the key next steps for achieving the SDGs.

A new nexus for sustainable development

Recommendations from the Alpbach-Laxenburg Group (ALG) identify the key issues—challenges and barriers, outcomes and next steps—to support the effective implementation of the Sustainable Development Goals (SDGs). More

Monitoring, data gathering, and evaluation processes are vital for the successful implementation of the multiple aims of the Sustainable Development Goals, argue leading researchers in a commentary in Nature. More

The World in 2050:  Pathways towards a sustainable future

A new research project, announced today, will develop pathways to achieve sustainable development within a safe and just operating space of a stable planet. More