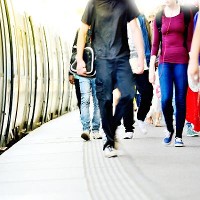 IIASA and EC-JRC today launched the new Centre of Expertise on Population and Migration. The centre was created in response to a need for better data and research related to the longer term impacts of migration on the population structure of the EU.

The new research partnership will be co- headed by IIASA World Population Program Director Wolfgang Lutz, also the founding director of the Wittgenstein Centre for Global Human Capital (IIASA, WU, VID), and by Delilah Al-Khudhairy, Director of policy Support Coordination at the JRC.  Lutz said, “Apart from humanitarian considerations, which must be weighed carefully, there is a real lack of information about what is the likely impact of alternative migration scenarios in the context of Europe’s aging population, which also considers the crucial aspects of education and labor force participation. This information is necessary to inform EU migration policy.” 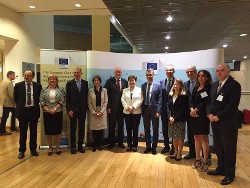 At the launch event today in Brussels, EC-JRC Director General Vladimír Šucha said, “Migration is one of the biggest challenges we face today. Credible policies to tackle its various dimensions require solid evidence basis. The Commission’s Knowledge Centre for Migration and Demography has the ambition to become the reference point for relevant knowledge and credible data on migration. I am very glad that today we are also launching the first partnership of the Knowledge Centre, namely the Centre of Expertise on Population and Migration which is a joint initiative with IIASA and I am convinced of its valuable contribution to our work.”

The Centre of Expertise on Population and Migration will initially be funded for three years. The research staff will include five postdoctoral fellows who will work at IIASA, and five demography experts from the European Commission. The aim of the research is to provide a science-based assessment of what size and structure of migration will be helpful for Europe in terms of population aging and other issues, applying the tools of multi-dimensional population analysis, as developed at IIASA. The centre aims to bring new understanding to how migration could impact the future EU economy and society, and what policies could lead to the most positive outcomes. These tools allow researchers to consider not just people’s age and gender, but also education level and other skills that make up human capital.

"Evidence-based policy making needs scientific facts to cope with the current and future migration flows and the related societal changes,” says the Austrian Vice Chancellor and Federal Minister for Science, Research and Economy Reinhold Mitterlehner. “Austria, as the seat of IIASA and as one of the countries that have been most affected by the movement of refugees in recent years, is very pleased about this joint institute of JRC and IIASA and has high expectations for the research done in Laxenburg.”

The first step in the project will be to focus on empirical data about the composition of recent migrant populations in Europe. The project will also include scenario development for possible countries of origin in Africa and Western Asia with a focus on their future demographic and economic trends and new challenges arising from climate change. For the European countries it will focus on the economic, fiscal and social cohesion implications of alternative future migration scenarios.

“This partnership is a clear example of a synergy between science and policy, where IIASA researchers can provide their unique expertise in multi-dimensional population modelling to a matter of intense and emotional debate,” says IIASA Director General and CEO Professor Dr. Pavel Kabat.

Knowledge Centre for Migration and Demography

The Knowledge Centre for Migration and Demography (KCMD) is a new European Commission initiative on better knowledge management for sound EU policy making. To strengthen the Commission’s overall response to the opportunities and challenges related to migration, the KCMD aims to be the point of reference to support the work of Commission services and Member States on migration and related issues.

Launch event: Centre of Expertise on Migration and Demography