It is with profound sadness that IIASA marks the death of Professor Thomas Schelling on December 13. As a groundbreaking scientist, a Nobel laureate, and a thoughtful, articulate person, he was also a great friend and supporter of IIASA. 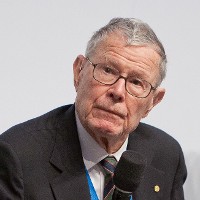 Schelling, a gifted economist, was among the first to apply game theory to international relations. In his seminal 1960s book, The Strategy of Conflict, he showed that even in the deadliest of conflicts there can be elements of common interest and cooperation between enemies. At a time of emerging nuclear tensions between the USA and the Soviet Union, Schelling’s work was enormously influential.

He provided the theoretical basis for the strategy of nuclear deterrence— using the threat of nuclear attack as an instrument of political influence to prevent nuclear attack. In 2005 he was awarded the Nobel Prize in Economics jointly with Robert J. Aumann “for having enhanced our understanding of conflict and cooperation through game-theory analysis.” The Nobel Prize Committee felt that his work had “proved of great relevance for conflict resolution and efforts to avoid war.”

Schelling’s work extended even beyond the complex questions of conflict resolution, however. When the issue of climate change first came to light in the 1970s, Schelling was appointed by the US National Academy of Sciences to investigate, and made contact with IIASA. “I never, at that time, discovered any other research organization that had done integrated work on the subject [of climate change],” he said. Impressed with the institute’s approach, he embarked on a long and fruitful relationship with IIASA.

Working at the institute from 1994-1999, across several research areas, Schelling was instrumental in creating the IIASA integrated assessment framework, under which IIASA models were connected for the first time, providing crucial input for the Special Report on Emissions Scenarios from the Intergovernmental Panel on Climate Change. He also went on to serve as a member of the US National Member Organization Committee, and is remembered with great fondness and respect by all who knew him. “Tom’s talent was asking questions that go to the core of scientific and policy issues,” says IIASA research program leader JoAnne Bayer, who worked with him on many projects. “His sharp insight will be missed.”

In particular, Schelling felt that investing in up-and-coming researchers was crucial and he was an enthusiastic advocate for the IIASA Young Scientists Summer Program (YSSP). “By bringing the world’s most promising young scientists to spend a summer at IIASA, the institute ensures the next generation of scientists is even better equipped to solve the world’s problems,” he said. “The YSSP program alone would be worth the cost of US membership.”

Director General and CEO of IIASA Professor Dr. Pavel Kabat expressed his sorrow at the passing of Schelling, saying: “Tom shared a core value that we hold at IIASA—that integration is crucial, and that having different disciplines working alongside each other is the only way to build effective solutions to complex global problems. He will be greatly missed.”

Deputy Director General Nebojsa Nakicenovic adds: “Tom was able to turn his brilliant mind to topics from international conflict to racial segregation, to climate coalitions. His death is a loss not only for IIASA, or game theory, but for humanity.”

Please use the space below to share your messages of support or memories of Schelling.

IIASA and the Nobel Prize