Four exceptional young scientists from the 2016 Young Scientists Summer Program will receive funding to continue their research projects at IIASA in 2017. 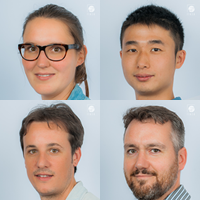 IIASA today announced the winners of the annual Peccei and Mikhalevich awards for Young Scientists Summer Program (YSSP) participants. These awards will enable four participants from the 2016 YSSP to return to the institute for another three months to continue their research projects.

These awards, named in honor of IIASA alumni Aurelio Peccei and Vladimir S. Mikhalevich, are given each year for outstanding work by YSSP participants.

César Terrer, from Imperial College London, has won the Peccei Award with Honors for his study, “Global consequences of nitrogen-mycorrhizal effects on the land carbon sink under rising CO2.” Read more about Terrer's research on the IIASA blog.

Marcus Thomson, from the University of California, Los Angeles, won the Mikhalevich Award, with Honors, for his study, “Climate, corn, and culture: Simulated impact of paleoclimate change on Fremont Native American maize farming in Utah.”

Clara Orthofer, from the Technical University of Munich in Germany, won the Peccei Award for her study, “Shale gas & South Africa’s energy future - too costly, too late?”

Wei Qi, from the Institute of Geographic Sciences and Natural Resources Research, Chinese Academy of Sciences, won the Mikhalevich Award for his study, “Simplifying the complex: Alternative measures of bilateral migration.”

Donations from alumni and other supporters also give additional students the chance to participate in the YSSP. The Annual Fund is currently accepting donations to fund 2017 YSSP participants.

APPLY TO THE YSSP