Climate change will likely have negative impacts on food production in West Africa, but a new study provides insights on how strategic planning by decision makers could ease or exacerbate food security challenges in the region. 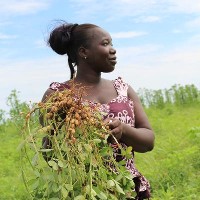 Climate projections for West Africa show that crop yields and grass for livestock grazing are likely to decline in the future. But a new study in the journal Global Environmental Change shows that when ineffective institutions and political instability limit investment in agriculture climate change would have greater impacts on regional food security.

West Africa is a major producer of crops such as cassava, millet, and sorghum but in the future, regional production may not be able to meet the growing demand for food and livestock feed. “How and to what extent the region’s agricultural sector develops in the future will have profound implications for the livelihoods of millions of people,” says IIASA researcher Amanda Palazzo, who led the study.

“In some ways, West Africa is at the mercy of changes in the rest of the world—there is not much that people can do to stop global change on a local level. Our study shows that indeed, socioeconomic development and climate change in the rest of the world will affect West Africa. But that doesn’t mean that policymakers are powerless to avoid the impacts,” says Palazzo. “We found that food security in the region could improve even under the threat of climate change if the region takes a coordinated and long-term approach to investment and development.”

In particular, the study finds that investments in agriculture, specifically to improve crop yields, could lead to greater food production but also to an expansion of agricultural area into forest and other natural land within West Africa. However, regional productivity gains in the agriculture sector could help to reduce the global burden on land for agricultural production, in some cases sparing three times as much land outside the region for each hectare of land converted to agriculture within the region.

The study also shows that which people in the region make the decisions in managing resources, directing investments, and prioritizing market access, will be a key driver for the economic growth, and, therefore the food security, of the region. 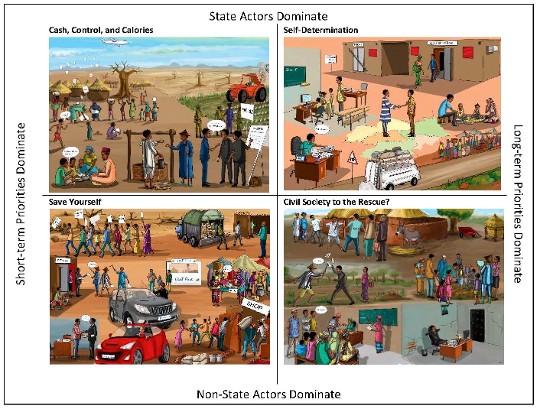 In a process led by the CGIAR program on Climate Change, Agriculture and Food Security (CCAFS), Palazzo and colleagues from the International Food Policy Research Institute (IFPRI) and University of Oxford’s Environmental Change Institute (ECI) worked closely with local experts to develop plausible futures for the region. Then they linked the scenarios with the new global socioeconomic projections developed for climate change research—the Shared Socioeconomic Pathways (SSPs) —and adapted them to provide specific information for West Africa. In order to create scenarios that would be useful for regional planning, the researchers conducted extensive meetings with policymakers, farmers, and other stakeholders to gain an understanding of the many factors driving agricultural production in the region.

The study resulted in a package of scenarios specifically designed for West Africa, up to the year 2050, where climate change is considered an unavoidable outside force that looms in each scenario. The scenarios provide descriptions of potential future developments, including narratives as well as quantitative projections for factors such as population, economic growth, deforestation, land use, food production, and trade.

The scenarios have already proved useful to policymakers because they offer multiple, challenging future worlds in which they can test draft plans and policies. “This is quite unique. Often, the process ends after stakeholders and modelers finish envisioning scenarios through words and numbers. However, we design processes that allow policymakers to identify actions that are necessary to avoid potential problems or actions to take that have a good chance of yielding desirable results in all potential futures,” says Joost Vervoort, the scenarios officer for CCAFS and a senior researcher at the ECI, a study coauthor.

In 2015, policymakers used the scenarios to test and examine Burkina Faso’s National Plan for the Rural Sector (PNSR), which led to 22 policy recommendations. In 2016, versions of the scenarios were used to examine Ghana’s National Livestock Policy. These processes relied on model-based quantitative scenarios, to give policymakers insights into the development of the agriculture sector and measure the trade-offs between regional development, food security, and the environment.

Back to the future: Using scenarios to road-test the policies of tomorrow