Fast action on near-term warming will provide many potential benefits to achieving the global Sustainable Development Goal, according to new research from scientists at IIASA,  in the USA and Europe. 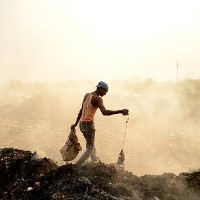 An article published in Science last week said governments should commit to a near-term climate goal, which would help achieve global sustainable development goals and climate objectives over the next 25 years and keeps us on a pathway that limits warming to less than to 2 degrees Celsius (⁰C) by the end of the century.

Drew Shindell, lead author and Professor of Climate Science at Duke University, said the Paris Climate Agreement’s long-term goal to keep warming below 2⁰C by the end of the century is important but the path to reach it is just as important.

“It matters because damages due to climate change are already upon us, affecting the health and livelihoods of those alive today and challenging our ability to meet the 2030 Sustainable Development Goals,” Shindell said. “It matters because the rate of warming in the near-term affects the rate of crop failure in developing countries, it affects the rate of sea-level rise and policies to slow the rate have dramatic effects for food security and air quality.”

The article’s authors – members of the Scientific Advisory Panel of the Climate and Clean Air Coalition (CCAC) – recommend adopting an ambitious but plausible near-term goal to slow global mean warming over the next 25 years by half. This involves reducing emissions of short-lived climate pollutants (SLCPs) like methane and black carbon by approximately 25% and 75%, respectively, by 2030, and eliminating high-warming hydrofluorocarbons (HFCs) through the fast ratification and implementation of the Kigali Amendment to the Montreal Protocol.

IIASA Air Quality and Greenhouse Gases Program Director Markus Amann was a coauthor on the study. He says, “Many of the measures that could slow the rate of warming, such as proper waste management, improved leak detection in the oil and gas industry, or a switch to cleaner cooking fuels, are usually implemented at some point in time when countries develop. Advancing their implementation would accelerate the development process in addition to delivering climate benefits.” 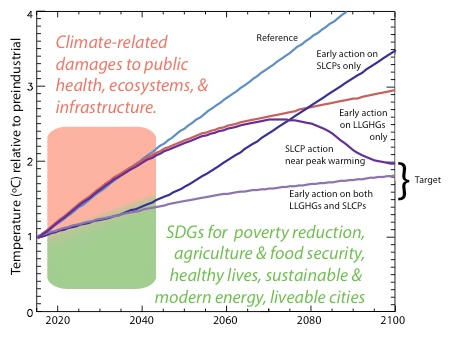 Short-lived climate pollutants are potent climate warmers but reducing their emissions can effectively reduce near-term warming as they are short lived in the atmosphere. Reducing these pollutants can also prevent millions of premature deaths from air pollution and improve crop yields.

If avoiding long-term peak warming was the sole objective of global climate action then actions to reduce short-lived climate pollutants could theoretically be implemented once carbon dioxide (CO2) emissions had peaked with only a modest temperature penalty. However, the climate change-related damages to the current and next generation, danger of crossing thresholds for abrupt climate change, and the multiple benefits from fast action to reduce warming necessitates consideration of a near-term climate goal.

Fortunately, limiting long-term warming has never been the sole objective of global climate policy nor the Paris Agreement. The Paris Agreement explicitly links the world’s long-term climate and near-term sustainability agendas by emphasizing that efforts to address climate change should occur within “the context of sustainable development and efforts to eradicate poverty”.

“If we do not implement near-term strategies and only focus on long-term goals we will miss the opportunity to achieve multiple benefits and reduce premature deaths, avoid millions of tons of reduced crop yield and avoid climate-related impacts that will be associated with the rapid increases in temperature that would occur unless we take this action,” Shindell said.

Johan Kuylenstierna, Policy Director of the Stockholm Environment Institute, based at the University of York, United Kingdom, said that adding a focus on near-term climate change in addition to long-term concerns will help countries frame climate action in the context of their near-term national goals and objectives, for example within the timeframe of the 2030 Sustainable Development Goals. This would reduce societal and environmental damage for both current and future generations.

“If governments adopt a goal to reach the long-term Paris target by following a pathway with the lowest possible rates of warming and maximum sustainable development benefits in the near-term, then they could benefit by strategically coordinating climate and development policies,” Kuylenstierna said. “Having a near-term goal that achieves benefits across multiple objectives and across multiple parts of the government can motivate action, focus effort and coordinate policy.”

Countries should commit to mitigation pledges that keep them on a pathway to achieving both near term and long-term goals. In many countries, additional effort might be required to create emissions inventories for pollutants they have not previously considered or reported.

However, there are existing methodologies that can be built upon, and pledges by countries that include individual short-lived climate pollutants would likely catalyze action toward the 1.5/2⁰C target while helping them deliver on their Sustainable Development Goals.

A near-term pathway goal is needed to ensure that projected reductions take place quickly. By closely linking global climate efforts through the United Nations Framework Convention on Climate Change (UNFCCC), the Sustainable Development Goals, and efforts to reduce HFCs (such as under the Kigali Amendment to the Montreal Protocol), the pathway-to-the target approach can mutually reinforce these efforts.

Text adapted from the press release released by CCAC.