Around 40% of irrigated agriculture is unsustainable, according to a new study. However, better farm water management could help reconcile global water, environment, and food targets. 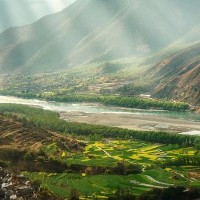 Water use for food production today largely occurs at the expense of ecosystems. About 40% of the water used for irrigation are unsustainable withdrawals that violate so-called environmental flows of rivers, a new study shows for the first time. If these volumes were to be re-allocated to the ecosystems, crop production would drop by at least 10% on half of all irrigated land, especially in Central and South Asia. This points to a trade-off between water and food UN Sustainable Development Goals. However, improvement of irrigation practices can sustainably compensate for such losses at global scale. More integrated strategies, including rainwater management could even achieve a 10 percent net gain of production.

“Seemingly conflicting elements of the Sustainable Development Goals (SDGs) can be reconciled if addressed properly,” says Jonas Jägermeyr from the Potsdam Institute for Climate Impact Research, lead author of a team of scientists from institutions including IIASA and Wageningen University. “Agricultural production and water management are a key example, since food production will likely double in the future while the water cycle will regionally be disturbed by climate change.”

The study in Nature Communications (available open access) provides new quantitative evidence that negative environmental effects can be avoided while maintaining food production at global level. Much of this potential can be realized through traditional and affordable farmers’ practices accessible for smallholders.

Amandine Pastor, a researcher at Laboratoire d'étude des Interactions Sol-Agrosystème-Hydrosystème, IRD-INRA in France, worked on the project while participating in the IIASA Young Scientists Summer Program in 2014, and as a researcher at IIASA from 2015-2016. She says “This study highlights the fact that freshwater ecosystems are at risk including a loss. We need to find consensus between different water users and to rethink agriculture production in some parts of the world. Measures such as improving irrigation techniques and selecting less water intensive crops could help sustain environmental flows.”