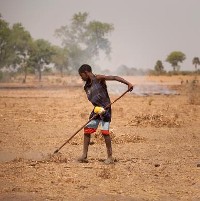 Climate policies that target agriculture and forests could lead to increased food prices, but reducing deforestation and increasing soil carbon sequestration in agriculture could significantly reduce greenhouse gas emissions while avoiding risk to food security, according to new research published in the journal Environmental Research Letters.

As countries look to reduce their greenhouse gas emissions, many see potential in their forests and farms. The land-use sector, which includes agriculture and forestry, contributes approximately 25% of the human-caused greenhouse gas emissions that are contributing to climate change. At the same time, vegetation, including natural as well as agricultural lands, take up CO2 from the atmosphere and can store it in biomass and the soil.

“The land-use sector is key for successful climate change mitigation,” explains IIASA researcher Stefan Frank, who led the study. “But providing an increasing amount of biomass for energy production to substitute fossil fuels while at the same time reducing emissions from the land use sector, for example through a carbon tax, could also have the effect of raising food prices and reducing food availability.”

In the study, Frank and colleagues explored the impacts of climate mitigation policies on food prices. They examined the potential impacts of both global action, represented by a carbon tax, and regional and national policies. 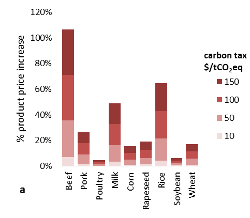 The study showed that a stringent mitigation target for the agriculture and forestry sectors could lead to increased food prices and reduced food production. Though globally coordinated mitigation policies outperform regional or national policies both with respect to emission abatement and food security, adverse impacts on food security remain. The study presents two strategies that could bring benefits for climate while simultaneously maintaining food security: reducing deforestation and increasing soil carbon sequestration.

Reducing deforestation is not a one-size-fits-all solution
The study found that in countries with a lot of land and a high proportion of emissions from land-use change, such as Brazil or Congo Basin countries, there is a large potential for forest restoration and preventing deforestation. However, in more densely populated countries with emission intensive agriculture such as China and India, strict efforts to reduce agricultural emissions could lead to substantial impacts on food security, while not providing big climate benefits due to emission leakage. Emission leakage means that emissions that are saved due to a policy within one country would be replaced by additional emissions outside the country.

“In some countries, stopping deforestation could provide a big reduction in emissions with only a marginal effect on food availability,” says Frank. “But a one-size-fits-all approach will not work. In places like China and India, the focus should be on soil organic carbon sequestration and other win-win options that decrease the emission intensity of agriculture.”

“You keep the soil healthy, you offset greenhouse gas emissions, and you preserve crop yields at the same time,” says Frank. In fact, under a carbon price policy, soil carbon sequestration measures could even provide additional revenue for farmers as they get paid for the carbon sink they provide.

“This study shows the major role of soil organic carbon sequestration for ensuring food security under climate stabilization scenarios,” says Jean-Francois Soussana, a study coauthor from the French National Institute for Agricultural Research (INRA). “Agricultural soils could provide a key solution for climate change mitigation and adaptation and for food security, but changing land management to store carbon in soil organic matter will require large efforts that could be facilitated by multi-stakeholder platforms like the 4 per 1000 initiative.”

This study shows how including an existing but largely ignored mitigation option in policy planning could substantially improve the climate policy performance with respect to food security. “Given the challenge of stabilizing climate change below 2 degrees, all options need to be carefully considered to minimize trade-offs, and potentially achieve complementarity, with other Sustainable Development Goals,” concludes IIASA researcher Petr Havlík, another study coauthor. 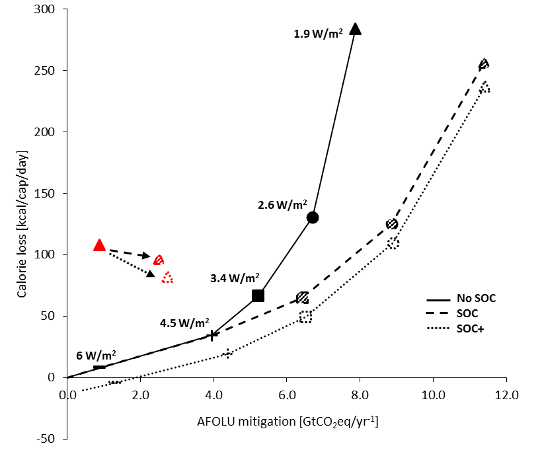