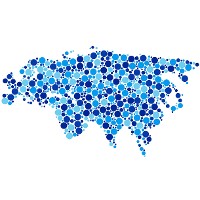 The “Challenges and Opportunities of Economic Integration Within a Wider European and Eurasian Space” project also includes the Eurasian Development Bank, the Vienna Institute for International Economic Studies (WIIW), and the Centre for European Policy Studies (CEPS).

The EAEU was set up in 2014 by Belarus, Kazakhstan, and Russia to foster economic ties between Eurasian nations and now boasts a single market covering 183 million people and a GDP of more than US$4 trillion. There is therefore much interest in creating close economic ties between the EAEU and the EU but current political tensions between the EU and Russia have significantly damaged economic relations. IIASA has served as a unique, depoliticized platform to allow experts and representatives to meet and discuss opportunities and barriers associated with closer economic relations.

“At this moment the European Commission does not engage in any official contacts with the Eurasian Economic Commission. This creates a significant uncertainty not only at the political, but also at business level. One could take a positive look at the currently uncertain political situation: The absence of contacts and the continued period of no action on the EC side, gives time to carefully develop the conditions of possible EU-EAEU economic cooperation, taking into account the interests of both sides,” says Elena Rovenskaya, IIASA Advanced Systems Analysis program director.

The three papers cover three focus areas – non-tariff barriers, such as technical product standards, foreign direct investment between the EU and EAEU, and transport corridors. Each was headed up by a different IIASA partner organization.

Michael Emerson, an associate senior research fellow at the CEPS and formerly of IIASA, was the lead author on Technical Product Standards and Regulations in the EU and EAEU – Comparisons and Scope for Convergence, which looked at how non-tariff barriers for goods could be handled in a hypothetical free trade agreement (FTA) between the EU and the EAEU. Emerson says that their main finding was that the EAEU has adopted European and international standards for goods more fully that was previously realized. This lays the groundwork for legal and technical cooperation.

One option is a Mutual Recognition Agreement (MRA), such as that which exists between the EU and the US, where, although standards differ, accredited bodies in the exporting country will certify to standards in the importing country. Another option is an Agreement on Conformity Assessment and Acceptance of Industrial Products (ACAA), where the two parties adopt identical substantive regulations and standards. The paper’s writers stress that it only deals with technical and economic aspects, and not the political context under which the recommendations could be realised.

The research for the report Foreign Direct Investment between the EU and EAEU was led by IIASA senior research scholar Peter Balas. FDI is an important tool in making capital available. Investment flows between the EU and Russia, however, are currently in a steep decline, largely as a result of mutual sanctions.

The researchers note that there is unlikely to be any changes to the political situation in the foreseeable future, so only short-term measures can be suggested. Existing investments should be protected and administrative procedures simplified and streamlined. Governments should gradually open procurement procedures and there should be more transparency for investments and investors. The researchers also recommend that the regulatory environment in Eurasian countries should be improved to incentivize EU investment.

The third paper, Trans-Eurasian Land Transport Corridors: Assessment of Prospects and Barriers, looks at the continental transport corridors in Greater Eurasia, with the research led by Evgeny Vinokurov from EDB. Economic cooperation between Europe and Eurasia will increase land transport capacity, which is particularly important for landlocked countries. The land-based flow of cargo along China-EAEU-EU routes has doubled every year for the past five years. However, further development will require coordinated action, including a higher level of regulatory harmonization and the development of railway infrastructure and various border-crossing points. Chinese subsidies have improved the economics of land transport, and the stability of such subsidies will be a key issue.

Vinokurov warns, however, that the researchers are sceptical of the likelihood of transborder investments and investments in transport corridors are likely to remain largely domestic.

The researchers are planning the next phase of the project with the aim to provide the scientific foresight and foundations of a potential trade agreement, contingent to a positive resolution of a political crisis.

On 6 June, 2018 the three working papers will be presented in Moscow at the high-level conference “Prospects for a deeper EU – EAEU economic cooperation and perspectives for business”. The event is co-organized by IIASA, the Eurasian Economic Commission (EEC), the Russian Union for Entrepreneurs and Industrialists (RSPP) and the Association for European Businesses in Russia (AEB).

Exploring the economics of the ‘Lisbon to Vladivostok’ idea concretely