Biofuel production in sub-Saharan Africa could be prioritized for aviation

A new study, designed by IIASA researchers for conservation charity WWF, has found that while there is a small but not insignificant potential for the production of sustainable biofuels in sub-Saharan Africa, this should be prioritized for the aviation industry which has limited other options when it comes to reducing carbon emissions. 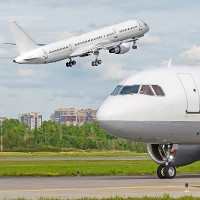 It is estimated that by 2050, global aviation could account for over 22% of all global carbon dioxide emissions due to rapid growth in air traffic, and with limited operational and aircraft design options for reducing emissions, there is a need for more low-carbon fuels.

These criteria exclude any crops and biomass residue which would result in negative environmental and social impacts, such as food insecurity, unsustainable use of scarce resources like water, land, the destruction of biodiversity and insufficient reduction of greenhouse gases.

Among the key findings are:

“The transition to a low-carbon economy with biomass as one of its energy sources will intensify the energy-agriculture linkage and add a new dimension to agricultural systems, heighten resource competition in the food system, and may provide new opportunities for rural communities. As food, feed and energy feedstock markets integrate more closely, both challenges and opportunities arise. Increasing biofuel feedstock production in sub-Saharan Africa, while at the same time meeting food demand targets and strictly following sustainability principles, faces a high degree of complexity. Integrated system analysis such as this helps unpack those complexities and will hopefully contribute to a better informed debate and policy development on the topic,” says IIASA researcher Sylvia Tramberend.

Adapted from text provided by WWF-SA.

This study was collaboratively conducted by IIASA and the WWF using the sustainability criteria of the Roundtable on Sustainable Biomaterials (RSB), and with the financial support of the Boeing Company.