A slowdown in fertility decline in sub-Saharan Africa was partially caused by disruptions in women’s education in the 1980s, according to new IIASA research. 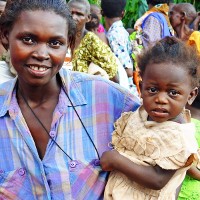 A recent stall in declining fertility rates in Africa is at least partially due to disruptions in women’s education, according to a study published this week in the journal Proceedings of the National Academy of Sciences.

“The stalls in fertility decline have been a puzzle to researchers for many years since Africa was expected to undergo the ‘demographic transition,’ where socioeconomic development leads first to reduced death rates, and after some lag, to reduced birth rates,” says IIASA researcher Endale Kebede, who led the study.

Starting in the 1980’s, it appeared that many African countries were on the onset of fertility decline. But in the 1990s and early 2000s, some sub-Saharan African countries saw a leveling-off of this decline. A few countries, such as Kenya and the Cote d’Ivoire, actually saw increasing fertility rates for some periods of time.

This leveling-off has led to revisions of population projections, and concern about the impacts of continued population growth in the region.

Previous research from IIASA’s World Population Program and the affiliated Wittgenstein Centre for Global Human Capital has shown that women’s education is a key factor linked to falling fertility rates.

“We were suspecting that the stalls could be linked to an education crisis some years back” ” explains IIASA researcher Anne Goujon, a study coauthor who started exploring the topic descriptively some years ago.

The new study provides strong evidence to support that theory, as well as further support for policies that encourage and support education for women.

In the study, researchers reconstructed fertility histories by age and education level of the mother from 18 African countries both with and without fertility stalls. They pooled these data to create a dataset of more than two million births to some 670,000 women born between 1950 and 1995.

This painstaking reconstruction allowed the researchers a much more detailed view than previously available of what was happening in the populations.

“Our study was a cohort-wise analysis, meaning that we followed women by birth-year to understand their entire birth histories and the factors that contributed,” says Kebede, “We found that cohorts who were affected by the educational discontinuities in the 1980s tend to have higher level of fertility. This is both due to the direct effect of education on fertility and the high vulnerability of the poorly educated cohorts to period specific shocks.”

Wolfgang Lutz, IIASA World Population Program director and Wittgenstein Center founding director, says that the study marks and important step in understanding and projecting future population trends in Africa. “Africa’s future population growth is the key factor driving future world population. And not only will population growth affect the African continent, it will have major impacts on the rest of the world through migration and global environmental impacts,” says Lutz.