Is there a demographic need for migration in Europe?

A European Commission-IIASA flagship report has found that an increase in the EU population aged 65+ is certain – regardless of higher fertility or migration. However, raising labor force participation (particularly for women) and improved education of natives and migrants have the power to nullify aging-related worries. 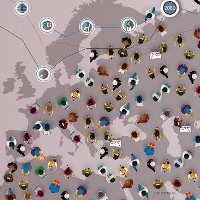 Decision makers often assume that higher fertility or more migration will bring solutions to the EU’s demographic challenges. Yet, “an older age-structure of the population is an inevitability, but this need not be a serious problem if people in the future are better educated and participate more in the workforce than today,” says Wolfgang Lutz, IIASA World Population Program director and lead scientist of the Centre of Expertise on Population and Migration (CEPAM).

CEPAM was founded by the European Commission and IIASA in response to the migration events of 2015. Despite its origins in the dramatic scenes that seized global attention, CEPAM’s mission has been to focus on the long-term, providing analyses of the gradual, but consequential demographic changes taking place across the EU and the wider world.

CEPAM research has found that even scenarios with unrealistically high increases in fertility (+50%) or double immigration (approximately 20 million every 5 years) do not have the ability to fundamentally change the European population’s age structure.

“Despite clear momentum towards aging, it is important not to overlook the increasing average number of years of active and healthy life, greater productivity, and possible loss of jobs due to technological advancements – all of which have profound implications for the future work force,” explains Lutz. These changes call into question the conventional approach of only looking at the age structure of the population.

By using state-of-the-art demographic modeling, CEPAM could test scenarios of various volumes and migrant education levels based on Canadian, Japanese, and other approaches. One of the main relationships to emerge from this investigation shows that migration can significantly increase total population size, but as with age structure, it has much less influence over the ratio of non-workers to workers. By contrast, expected rises in EU female labor force participation have the power to counterbalance potential increases in dependency.

The new report also covers dynamics within the EU, including movement west. Some southern and eastern Member States have already experienced marked population declines, and if trends continue, by 2060 the populations shrink by a substantial 30% or more. Such changes raise concerns about ‘brain drain’, or sending countries losing their talent – relevant not only in the EU, but for many countries around the world.

Globally, the report illustrates how the future of population growth largely depends on what happens with education in Africa – by far the world’s most rapidly growing region. Education is a key prerequisite for empowering women to make conscious decisions about fertility.

Fertility rates in Africa are slowly moderating, but remain very high (4.7 children per woman on average) compared to all other continents. If education trends continue as they have in recent years, the world population will reach 9.6 billion people in 2060. If education stalls, followed by a similar delay in the fertility decline, the world population could reach around 11 billion. Depending on its speed, population growth has the potential to outpace infrastructure expansion, leading to an Africa that has a less educated population than it does today.

“The hope is for Africa to enter a self-reinforcing cycle of lower mortality, lower fertility, and higher development – brought on by education,” says Lutz, adding, “This is exactly the recipe called for, if we are serious about sustainability and international development”.

Migration policy and related fields require basic demographic foundations and fluency. To this end, the report concludes with identifying existing blind spots that can be minimized by improving demographic data and research capacity at the European level, particularly in terms of multidimensional analysis and giving more attention to Africa and other neighboring regions. This report has sought to shift migration policy away from short-term thinking, in favor of realistic and science-based planning for the long run.

A high-level event launching the flagship report and discussing its policy implications will take place on 4 June 2019 at the Joint Research Centre (JRC) headquarters in Brussels.