Clean cooking energy transitions are extremely challenging to achieve, but they offer enormous potential health, environmental, and societal benefits. A study by researchers from IIASA, the University of British Columbia, and the Stockholm Environment Institute provides new insights about an Indian program that aims to solve one of the most difficult developmental challenges of the 21st century – smoky kitchens. 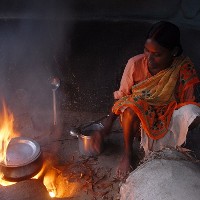 Around the world, more than three billion people – nearly half the world’s population – cook their food using solid fuels like firewood and charcoal on open fires or traditional stoves. This produces a lot of smoke, creating indoor air pollution, which, according to the World Health Organization (WHO), annually kills millions of people. This type of pollution is of particular concern in India, where women and their young children, who typically stay close to their mothers while they are cooking, bear the brunt of the health problems caused by indoor pollution.

This led the Indian government to launch a massive program – Pradhan Mantri Ujjwala Yojana (PMUY) – in 2016, to increase the adoption of Liquefied Petroleum Gas (LPG), which is a clean fuel alternative that can be used for cooking. The program provides a combination of financial incentives in the form of subsidies and loans to cover the capital cost of stoves and LPG cylinder installations, and aims to generate awareness about the benefits of clean cooking. To date, around 70 million poor women, mostly in rural India, have benefitted from the program in the 35 months since its launch. Until now, few analyses of the program have been done to understand if the adoption of this new technology has led to sustained use of LPG. If LPG does not replace solid fuel use, the envisaged health and environmental benefits of the program will not be fully realized.

In their study published in Nature Energy, researchers endeavored to understand how the launch of the program has altered both the adoption and use of LPG. They employed an LPG sales dataset from one district of a southern state of India (Koppal district in Karnataka state) to carry out their analysis. This is a novel approach, as previous analyses have relied largely on self-reported survey data, which may suffer from inherent biases.

The study addressed four questions: First, the team looked into how long it would have taken to reach the current level of LPG adoption in a business-as-usual scenario, in other words, in the absence of the program. Second, they asked to what extent PMUY consumers are using LPG compared to general (non-PMUY) rural consumers. As part of this exercise, the researchers compared PMUY customers’ use of LPG with that of other rural peers, rather than to urban or average national consumers’ use of the fuel, as the rural population has easier access to non-monetized solid fuels like firewood, as well as distinct livelihoods and lifestyles compared to the urban population. The common narrative that the use of fuels is likely to increase gradually as people become more familiar with them, led the team to also examine whether LPG use for PMUY beneficiaries will increase over time. Lastly, the team examined the impact of price fluctuations and seasonal variations on LPG consumption.

The analysis indicates that the program has fast-tracked LPG consumer enrolments by about 16 months in the region assessed, while the consumption of LPG by program beneficiaries is estimated to be about half that of the average rural consumer (2.3 compared to 4.7 cylinders of 14.2 kg LPG annually). This, in turn, is about half of what would be required by an average family in India to cook exclusively with LPG – a typical rural family would require about 10 cylinders per year. The team analyzed up to five years of LPG purchase data for general rural customers since they adopted LPG and found no discernable changes in LPG consumption with experience or time for these users. In their first three years as customers, roughly 75% of consumers’ LPG cylinder purchases either stayed the same or fluctuated by one to two cylinders. The analysis also indicates that consumers are sensitive to changes in LPG prices and that there is significant seasonal variation in purchases of LPG over a year. Refill rates in summer when agricultural activity is limited, are for instance about 10% lower than rates during cropping and harvest seasons when people are busy with agricultural work.

“Our work reaffirms that there is a distinct difference between the adoption of a new technology and its sustained use. The PMUY was specifically designed to promote adoption, and based on that metric, this program is an unparalleled success, with near universal LPG access expected within the next couple of years. However, if we focus on the ultimate goal of smokeless kitchens, PMUY must be modified to explicitly incentivize regular LPG use. Our study suggests some obvious mid-course corrections to the program to encourage regular use of LPG. This includes the use of seasonal vouchers during low cash flow periods for poor rural agricultural households, and behavioral nudges and stronger information and education campaigns,” says Abhishek Kar, lead author of the study. Kar is a doctoral candidate at the University of British Columbia in Canada, and started the work as part of the IIASA Young Scientist Summer Program (YSSP).

According to the researchers, the rural general population (non-PMUY beneficiaries) should also be targeted by incentives to advance regular LPG use, as their average use is still very low across rural India. As some African countries are planning to emulate India’s PMUY, the lessons from this evaluation could also be highly relevant to policy beyond India.

“Increasing the adoption of LPG among rural, poor populations is a daunting task, which the government of India has admirably achieved. Getting people to use LPG regularly is however a far more difficult task. Addressing this requires further research to better understand the barriers to regular use and to establish effective strategies to overcome these,” concludes Shonali Pachauri, study coauthor and a researcher in the IIASA Energy Program.

This study was funded by the United States Environmental Protection Agency, the Clean Cooking Alliance, the Peter Wall Institute for Advanced Studies, and the Collaborative Research and Training Experience- Atmospheric Aerosol Program (CREATE-AAP) at the University of British Columbia.