Assessing the effects of climate change on future wheat production

Wheat is the world’s largest rain-fed crop in terms of harvested area and supplies about 20% of all calories consumed by humans. A new study has found that unless steps are taken to mitigate climate change, up to 60% of current wheat-growing areas worldwide could see simultaneous, severe and prolonged droughts by the end of the century. 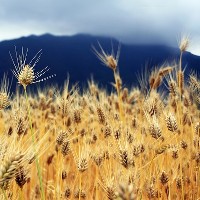 The frequency and intensity of severe droughts that negatively affect rain-fed crops like wheat, is expected to increase due to global warming. Previous research has shown that global wheat production is strongly dependent on the availability of water, both during and before the crop-specific and typically unirrigated growing season. Drought effects were also implicated as one of the key drivers in the 2007-2008 spike in global wheat prices. The Food and Agriculture Organization (FAO) projects a 43% increase in the global annual demand for cereals, including wheat, and this increase will predominantly come from developing countries. If sustainable agricultural intensification is not successful in these regions, they will increasingly be forced to depend on expanding their cereal imports. Given the world’s dependency on this staple to provide for our daily nutritional needs, an increase in the severity and frequency of droughts in wheat producing areas presents a significant risk in terms of food insecurity and, consequently, political instability and migration.

In their study published in the journal Science Advances, researchers from several institutions including IIASA, the Global Change Research Institute in the Czech Republic, and the University of Arkansas in the US, developed a method to simultaneously quantify severe water shortages across the world’s entire wheat-growing area and calculate the probabilities of multiple or sequential severe water shortage events for baseline and future climates. Their projections show that, without climate change mitigation, up to 60% of the current wheat-growing area will face simultaneous severe water shortage events by the end of this century, compared to 15% today.

“If only one country or region experiences a drought there is less impact. If multiple regions are however affected simultaneously, it can affect global production and food prices, and lead to food insecurity,” explain study lead authors Miroslav Trnka, a professor at Mendel University and senior scientist at the Global Change Research Institute, and Song Feng from the University of Arkansas.

The team analyzed 27 climate models, each of which had three different scenarios. The analyses show that historically, the total area affected by severe drought worldwide and food prices are closely related. Furthermore, even under an ambitious mitigation scenario where global warming is stabilized at 2°C compared to preindustrial levels, the results indicate an increase in the frequency and extent of adverse weather extremes and related shocks on the production side would be unprecedented. The authors say that the extent to which this will affect food prices and food security will largely depend on the development of other influencing factors. In addition, reaching ambitious mitigation targets will likely lead to higher energy prices and a bigger demand for bioenergy in the medium term, which would further reinforce the impacts of severe water shortages on wheat prices.

“The long-term research focus of our team at IIASA has been on capturing the effect of shocks affecting the food markets. This study is innovative and contributes substantially to the neglected area of climate extremes in agriculture, as it brings new data to light on how likely the shocks caused by drought might be in near future,” notes study coauthor, Petr Havlik, Center Head for Environmental Resources Development and Deputy Program Director of the Ecosystems Services and Management Program at IIASA.

In light of present-day weather patterns, severe drought could affect up to 15% of current wheat growing areas. The authors point out that, although climate change stabilization in line with the Paris Agreement would substantially reduce the negative effects, they would still double between 2041 and 2070 compared to current conditions. They conclude that future assessments of production shocks in food security should explicitly include the risk of severe, prolonged, and near-simultaneous droughts across key world wheat-producing areas.