Who is telling the truth about their health?

When researchers or policymakers ask health related questions – which they do a lot – they often rely on self-reported rather than tested health data. IIASA researchers looked into how reliable this type of data is for research and found that, depending on country or age, self-reported data could be highly biased. 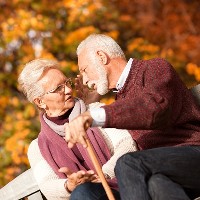 Declining fertility rates and increased life expectancy has resulted in increasing numbers and proportions of older people in populations across the world. Policymakers, as well as public and private healthcare providers need to understand how healthy the older population is to, for example, plan for future healthcare facilities and answer questions related to the employability of older individuals, which is in turn relevant in the context of adapting pension systems. Since most information for these topics comes from self-reported health data, it is important to understand how reliable this data is, especially in the context of population aging in Europe where governments are increasingly concerned with the health of the population, the care of the elderly population, and the comparison of health measures between countries.

Self-reported data is collected when individuals are simply asked to tell an interviewer about how they see their own health status. This method requires less time and is more cost effective than tested data, which is why it is much more readily available. Tested health data on the other hand, requires a nurse, other health professional, or trained interviewer to collect data through, for instance, cognitive and physical performance tests or blood samples that require more time and effort.

In a study published in the journal PLOS ONE, IIASA World Population Program researchers Sonja Spitzer and Daniela Weber explored when it is feasible to use self-reported health data for research, and when it would be preferable to rely on performance tests. Using micro-data for more than 100,000 individuals over the age of 50 from 19 European countries from the Survey of Health, Ageing, and Retirement in Europe (SHARE), they tried to determine which demographic groups could reliably be compared using self-assessed health data, and which groups could not, based on similarities or differences in their reporting behavior.

To this end, they compared the self-reported health measures from SHARE with their tested equivalent. Participants in SHARE were, for instance, asked if they experienced any difficulty in getting up from a chair. Following this self-report, participants were asked to physically stand up from a chair allowing the observer to see whether there was a difference between the self-reported and “real” mobility of the person. A similar measure was used for cognition, where individuals were first asked to rate their memory, after which they were asked to participate in a memory test where they had to recall a list of 10 words.

“We found large differences in reporting behavior between countries and age groups, which indicates that one has to be careful when comparing the health of countries or age groups based on self-reported data. Southern Europeans, for instance, are more likely to overestimate their health,” says Spitzer.

In Italy, for example, only 19.4% of respondents reported to have difficulty getting up from a chair, while in fact, 24.1% were unable to stand up when they were tested. Looking at this statistic, comparing self-reported health in Southern Europe with self-reported health from other countries might lead to biased results, as Southern Europeans could appear healthier than they actually are. According to the researchers, Southern, Central, and Eastern Europeans are overall much more likely to misreport their physical and cognitive abilities – both in terms of underestimating and in overestimating them – than Northern and Western Europeans.

The study further found that the older individuals are, the more likely they are to misreport their health and that a person’s educational level might also play a role in how they report their perceived cognitive ability.

“While 85.5% of respondents “get it right” in the age group 50-54, only 65.6% do so in the age group 90-94. This makes it difficult to compare the self-reported health of older individuals to that of younger individuals,” Weber explains. “Reporting behavior also differs a lot between educational groups, especially when it comes to questions about memory. It seems like educated individuals are much more aware of their current health status than less educated individuals.”

Previous literature has also shown or speculated that women report their health much different from men, but although this study also found some differences, they were not very large. According to the authors, this indicates that women “cheat” as much as men do when it comes reporting on their health – at least for the mobility and cognition dimensions that were considered in the study. In addition to the above, over- and underestimating health does not only harm the reliability of survey data, but also individuals themselves. Previous research showed that overrating health, for example, is also associated with riskier health behavior – older individuals that overestimate their physical ability are, for instance, more prone to suffer fall-induced injuries.

“We want researchers and policymakers to understand that one has to be careful when relying on self-reported data, because these data are prone to reporting biases. We however also want to emphasize that self-reported data can still lead to valuable and informative research if the data is treated with care,” Spitzer concludes.