The long arm of childhood conditions

Available research on the impact of a person’s socioeconomic status during childhood suggests that the circumstances one grows up in matter a great deal for adult health. The results of a new IIASA study supports the notion of a “long arm of childhood conditions” that remains invisible beyond mid-life but can affect health satisfaction later in life. 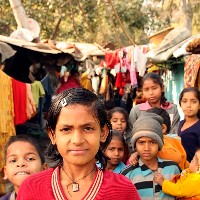 It is well known that people who are better educated, occupy higher positions in the labor market, and have access to more financial resources tend to enjoy better health than individuals with a lower socioeconomic status. We however know much less about how a person’s socioeconomic conditions in childhood affect their health in adulthood, and even more so, about the role that intergenerational social mobility, for instance, being more or less highly educated compared to one’s parents, plays in this regard.

This prompted Nadia Steiber, a researcher in the IIASA World Population Program, to explore whether the impact of childhood socioeconomic conditions on health varies over the course of an individual’s life. In this regard, she investigated whether childhood conditions are more important for health outcomes in younger adulthood, mid-life, or only later in life. In addition, she wanted to determine if it was possible to identify an effect of the social mobility experience – that is, moving up or down the social ladder compared to one’s parents.

Using data from the German Socioeconomic Panel (SOEP) and education as a central marker of socioeconomic status, Steiber tested whether parental education affects adult health satisfaction, either directly or indirectly through own educational attainment as a mediating variable. She applied diagonal reference models to disentangle the independent effect of intergenerational educational mobility. This was a novel approach as most earlier studies used linear models that are not able to disentangle the effects of the mobility experience from the effects of socioeconomic status during a person’s lifetime.

The results of her investigation, which were published in the journal Social Science & Medicine, show that whereas in mid-life one's own educational attainment plays the dominant role, the central importance one’s parents education – which represents the primary measure of socioeconomic status in childhood – is borne out for both sexes in later stages, when chronic diseases start being felt (age 60+).

The findings furthermore indicate that while the experience of downward educational mobility compared to one’s parents, can have a negative impact on the health of young adults, these negative effects appear to be transitory and thus show no effect on health satisfaction later in life. Since most previous work on the subject focused on health in later life, this was not known before.

According to Steiber, given that the effects of low parental education on health in mid-life are not found to be direct and irreversible, one may argue that later intervention can ameliorate earlier disadvantages. Yet, such conclusions may be called into question in light of the study’s findings for later-life health satisfaction. Although the health implications of a childhood spent with a low socioeconomic status may not yet be visible in mid-life, she says that childhood conditions can still show a lagged effect on health in later life, when people start getting more susceptible to chronic diseases.

Overall, the results thus suggest that the best time for interventions is childhood: to improve socioeconomic conditions and health-relevant environments in early life, to lay the foundation for positive trajectories in terms of socioeconomic status, and to mitigate early causes of later-life health problems.