Beyond the green revolution

There has been a substantial increase in food production over the last 50 years, but it has been accompanied by a narrowing in the diversity of cultivated crops. New research shows that diversifying crop production can make food supply more nutritious, reduce resource demand and greenhouse gas emissions, and enhance climate resilience without reducing calorie production or requiring more land. 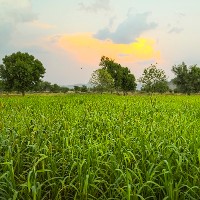 The Green Revolution – or Third Agricultural Revolution – entailed a set of research technology transfer initiatives introduced between 1950 and the late 1960s. This markedly increased agricultural production across the globe, and particularly in the developing world, and promoted the use of high-yielding seed varieties, irrigation, fertilizers, and machinery, while emphasizing maximizing food calorie production, often at the expense of nutritional and environmental considerations. Since then, the diversity of cultivated crops has narrowed considerably, with many producers opting to shift away from more nutritious cereals to high-yielding crops like rice. This has in turn led to a triple burden of malnutrition, in which one in nine people in the world are undernourished, one in eight adults are obese, and one in five people are affected by some kind of micronutrient deficiency. According to the authors of a new study, strategies to enhance the sustainability of food systems require the quantification and assessment of tradeoffs and benefits across multiple dimensions.

In their paper published in the Proceedings of the National Academy of Sciences (PNAS), researchers from IIASA, and several institutions across the US and India, quantitatively assessed the outcomes of alternative production decisions across multiple objectives using India’s rice dominated monsoon cereal production as an example, as India was one of the major beneficiaries of Green Revolution technologies.

Using a series of optimizations to maximize nutrient production (i.e., protein and iron), minimize greenhouse gas (GHG) emissions and resource use (i.e., water and energy), or maximize resilience to climate extremes, the researchers found that diversifying crop production in India would make the nation’s food supply more nutritious, while reducing irrigation demand, energy use, and greenhouse gas emissions. The authors specifically recommend replacing some of the rice crops that is currently being cultivated in the country with nutritious coarse cereals like millets and sorghum, and argue that such diversification would also enhance the country’s climate resilience without reducing calorie production or requiring more land. Researchers from IIASA contributed the design of the optimization model and the energy and GHG intensity assessments.

“To make agriculture more sustainable, it’s important that we think beyond just increasing food supply and also find solutions that can benefit nutrition, farmers, and the environment. This study shows that there are real opportunities to do just that. India can sustainably enhance its food supply if farmers plant less rice and more nutritious and environmentally friendly crops such as finger millet, pearl millet, and sorghum,” explains study lead author Kyle Davis, a postdoctoral research fellow at the Data Science Institute at Columbia University, New York.

The authors found that planting more coarse cereals could on average increase available protein by 1% to 5%; increase iron supply by between 5% and 49%; increase climate resilience (1% to 13% fewer calories would be lost during times of drought); and reduce GHG emissions by 2% to 13%. The diversification of crops would also decrease the demand for irrigation water by 3% to 21% and reduce energy use by 2% to 12%, while maintaining calorie production and using the same amount of cropland.

“One key insight from this study was that despite coarse grains having lower yields on average, there are enough regions where this is not the case. A non-trivial shift away from rice can therefore occur without reducing overall production,” says study coauthor Narasimha Rao, a researcher in the IIASA Energy Program, who is also on the faculty of the Yale University School of Forestry and Environmental Studies.

The authors point out that the Indian Government is currently promoting the increased production and consumption of these nutri-cereals – efforts that they say will be important to protect farmers’ livelihoods and increase the cultural acceptability of these grains. With nearly 200 million undernourished people in India, alongside widespread groundwater depletion and the need to adapt to climate change, increasing the supply of nutri-cereals may be an important part of improving the country’s food security.