Christiane Pohn-Hufnagl will join the executive team of the International Institute for Applied Systems Analysis (IIASA) as Chief Operations Officer (COO) on 1 July 2020. 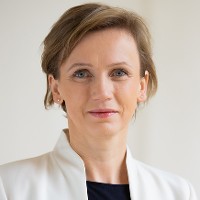 Responsible for the overall coordination of IIASA services including finance, human resources, information technology, and facilities management, the COO will ensure that IIASA researchers are supported by an environment that facilitates the delivery of world-class research.

Christiane Pohn-Hufnagl has a master’s degree in Law from the University of Graz, a master’s degree in Political Sciences from the University of Vienna, and a Diploma in Controlling. She is currently the Chief of Staff and Head of General Services at the International Anti-Corruption Academy (IACA) in Laxenburg, Austria. Previously she was a lecturer of European and Constitutional Law at the Officers Academy of the Austrian Federal Ministry of Defense in addition to heading the Unit of Work and Social Law within the Personnel Marketing Department. More recently, as from February 2019, she acted as the Officer-in-Charge of IACA, pending the appointment of a new Dean.

I am very much looking forward to taking up this position in such stimulating surroundings and to supporting the researchers, the staff, and the institute in their important work. ~ Christiane Pohn-Hufnagl

Director General and CEO of IIASA, Albert van Jaarsveld, commented: “Having worked in both the private and the public sectors and for an international and academic organization, we are delighted that Christiane Pohn-Hufnagl will bring her experience to IIASA. Her interpersonal and leadership skills will be a great asset to our multicultural environment as we embark on a new IIASA strategy.”

“There is always something inspiring about working in a scientific environment, and necessarily you will also always question yourself, your lifestyle, and social development,” commented Pohn-Hufnagl. “I am very much looking forward to taking up this position in such stimulating surroundings and to supporting the researchers, the staff, and the institute in their important work.”

IIASA is an international scientific institute that conducts research into the critical issues of global environmental, economic, technological, and social change that we face in the twenty-first century. It is funded by National Member Organizations—typically national academies or national research funders. The institute’s research findings provide valuable options to policymakers to shape the future of our changing world.

Pohn-Hufnagl will join Director General and CEO Albert van Jaarsveld, and Deputy Director for Science Leena Srivastava as part of the executive team responsible for leading IIASA over the coming years.