China’s fast economic growth and accompanying rise in food demand is driving an increase in water use for agriculture and industry, thus threatening the country’s water security. The findings of a new study underscore the value and potential of technological adoptions to help design targets and incentives for water scarcity mitigation measures. 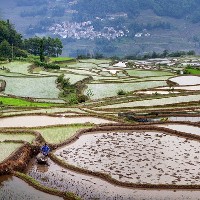 Over the last century, people’s water use has been increasing at more than twice the rate of the global population itself, with around 77% of this growth taking place in developing countries. According to the authors of the study published in the Proceedings of the National Academy of Sciences (PNAS), a lack of spatially detailed datasets however limits our understanding of historical water use trends and its key drivers, which makes future projections unreliable. As there are currently very few observation-based studies aimed at understanding the dynamics of historical water use, the authors endeavored to provide a detailed picture of how water use has been evolving amid socioeconomic, technological, and policy impacts, specifically in China. They provide evidence of the deceleration of human water use in the country and also attempted to identify the importance of water-conserving technological adoptions.

“The key question we wanted to address was how human water use responds to socioeconomic development, climate change, and policy interventions over time and space. We looked at China, not only because the country has transitioned from an underdeveloped country to the second largest economy in the world, but also because it is home to some of the Earth’s most water-stressed regions. Diverse water conservancy measures were developed since the 1980s to avoid a long term water crisis, but it is not well known how water use is influenced by economic growth, structural transitions, and policy interventions,” explains study lead author Feng Zhou, an Associate Professor at Peking University in China.

The researchers found that although China’s water use doubled between 1965 and 2013, there was a widespread slowdown in the growth rates from 10.66 km3 per year before 1975, to 6.23 km3 per year in 1975 to 1992, and further down to 3.59 km3 per year in the following years. These decelerations were attributed to reduced water-use in irrigation and industry, which partly offset the increase driven by pronounced socioeconomic growth. The adoption of highly efficient irrigation techniques such as drip or sprinkler irrigation systems and industrial water recycling technologies explained most of the observed reduction of water-use intensities across China. Without these technologies, China’s freshwater withdrawals would have been 80% more than the actual water use over the last two decades.

While water-conserving technological adoptions can deliver benefits of decoupling water use from socioeconomic development, studies in other countries have revealed an opposite relationship where technological adoption has led to an increase in intensive farming and thereby an increase in water use. According to the study, the first reason for these inconsistent results could be that intensive farming, such as high planting density and more sequential cropping had already been well developed in many Chinese prefectures. The second reason may lie in the nature of land institution in China where additional intensification requiring a change in irrigation infrastructure has been difficult to adopt due to the high fixed costs of the small fields allocated to farmers.

The authors explain that in China, the technological adoptions were accompanied by policy interventions including about 40 laws, regulations, programs, and action plans. In addition, the growth of China’s water use is very likely to continue to slow down, as the latest policy interventions provide a more stringent constraint to approach a peak of water withdrawal. However, uncertainties and potential future water scarcity will come from three aspects:

First, China’s land institution is undergoing a rapid transition towards large-scale farming through the farmland transfer system issued in 2014 alongside the adoption of water-conserving irrigation planned to cover 75% of the irrigated area in 2030. These ongoing transitions may lead farmers to expand irrigated areas or shift to water-intensive crops, which could offset the savings due to future improvement of irrigation efficiency.

The results further indicate that the westward development of the industrial sector has worsened water scarcity in many arid and semi-arid regions. High industrial water recycling has already been adopted in almost all these regions (>88%) except in Xinjiang, so that the potential for further water conservation would be limited. Without a stronger enforcement of capping water withdrawal, the industrial sector may become the most important driver continuing to increase water use.

The deceleration of water use revealed in this study partly challenges the results from global hydrological models, which commonly suggest an increase of total water use across China over the period 1971 to 2010. Zhou points out that one reason for this bias may be that technological change factors were prescribed as constant over space and time without consideration of policy interventions and actual technological adoption. It might however also be that socioeconomic activities data on China were simply disaggregated from national-scale statistics. The authors recommend that to improve model drivers, survey-based reconstruction datasets of water use  ̶  like those presented in this study  ̶  are valuable, and should be extended to other regions. In addition, the linkages between changes in water use and technological adoptions identified may be also be useful in the design of more realistic future water withdrawal scenarios, with the ultimate goal to improve global models used to assess water use targets and water scarcity mitigation.

“Modeling water use is very complex and we need much more regional data and coordination to improve our understanding of people and how they use water. The modeling community should work together to achieve this as it is crucial to identify the key drivers and mechanisms behind changing water use patterns across the world that help make future projections more reliable. Future policies to underpin water targets in for example, the UN Sustainable Development Goals framework, will be key to addressing the challenge of decoupling water use from socioeconomic development in China and other water-stressed countries,” concludes study coauthor and IIASA Acting Water Program Director, Yoshihide Wada.