A growing role for young scientists at IIASA

Additional opportunities in IIASA’s post-doctoral fellowship program and Young Scientists Summer Program (YSSP) will give more young scientists the chance to conduct research at the Institute. 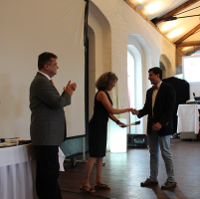 IIASA is pleased to announce the election of three new IIASA post-doctoral fellows, one Colosio fellow and four award winners from the 2013 Young Scientists Summer Program (YSSP). The fellowships and awards give more young scientists a chance to conduct research in IIASA’s uniquely international and interdisciplinary environment.

Congratulations to the new post-docs: Artem Baklanov, of the Institute of Mathematics and Mechanics, Russian Academy of Sciences. The re-established Colosio Fellowship was awarded to Mexican born Luzma Nava Jiménez from Laval University in Quebec. More information on IIASA post-docs. Also, the newly established Peter de Janosi Fellowship, will support one post-doc each year.

YSSP Awards 2013
Two annual awards, the Peccei and Mikhalevich Awards, are given annually for outstanding work by YSSP participants. They provide financial support for the winners to return to IIASA to continue their research projects. This year the awards have been extended from three months to six months, and an additional two participants received honorable mentions, for which they will also receive a grant for three months of additional research at IIASA.